At Lemonade, we set out to create an insurance company driven by social good – and that meant no marketing fluff or philanthropic giveaways. Instead, we wanted to build a different system – one that would bring out the best in all of us, and that would have social impact embedded in its very foundations.

That’s what the Lemonade Giveback is all about.

Unlike any other insurance company, we donate all unclaimed premiums to charity. What does that mean? We take a flat fee from your monthly premium, use the rest to pay claims, and give back what’s left to causes you care about once a year. So that annual donation doesn’t come directly from your pocket – instead, it comes from the good behavior and good fortune of the Lemonade community.

Want to dive deeper? Read on for everything you ever wanted to know about the Lemonade Giveback program- and for the entire list of Lemonade’s Giveback charities, scroll down.

Here’s a quick preview of what we’ll cover:

The Impact of Lemonade’s Giveback

The impact of 2020’s Giveback includes treating 50.000 ICU patients critical care specialists via Direct Relief, planting 36.963 trees across critical ecosystems in North America via American Forests, distributing 250 voter registration kits across the country via March For Our Lives, founding one rare cancer trial at Memorial Sloan Kettering Cancer Center via Cycle For Survival, supporting 355.500 students by 6.192 teachers in 2.450 schools in high-need communities across the U.S. via Teach For America, and providing 1,500 young adults with life-affirming crisis intervention services via The Trevor Project.

We are proud that our Lemonade community has been able to support so many projects and organizations around the world through the Giveback. Here you can find a list of all nonprofits we currently partnered up with in Germany.

Our Giveback program does more than just allow our Lemonaders to support causes they care about. It also changes the relationship between us (the insurer) and our Lemonaders, by aligning our interests.

Let us explain: Traditionally, insurance companies make money by saying ‘no’ to claims. Every Euro they pay out in claims is a Euro less to their bottom line. This creates an inherent conflict of interest between insurers and their customers, a system our Chief Behavioral Officer Dan Ariely says is designed to bring out the very worst in people.

Lemonade is different. By taking a flat fee and using the rest to pay claims, we’re never in conflict with our customers. If there’s leftover premium, it goes to charities chosen by Lemonaders themselves – so Giveback is baked into our business model.

In other words, Giveback ties our hands, so we’ll never be in a position where we’re deciding between making money and approving claims. We’ll never fight over the same coin.

When your unused premiums go to charity, it’s not an extra payment from your pocket. It’s simply due to your good fortune and good behavior – your unclaimed money rolls over to make a difference for someone else in this universe.

The Giveback model predicts that not every group will get a Giveback every year, but we hope most groups will have more good years than bad.

Social impact is a guiding value at Lemonade. We are a proud member of the B-Corp community, and one of the world’s only public benefit insurance companies. Our goal is not only to make insurance easy, simple, and instant – but a social good rather than a necessary evil. We want to make it easy for you to do good.

Check out some of the things our Lemonaders are saying about Giveback: 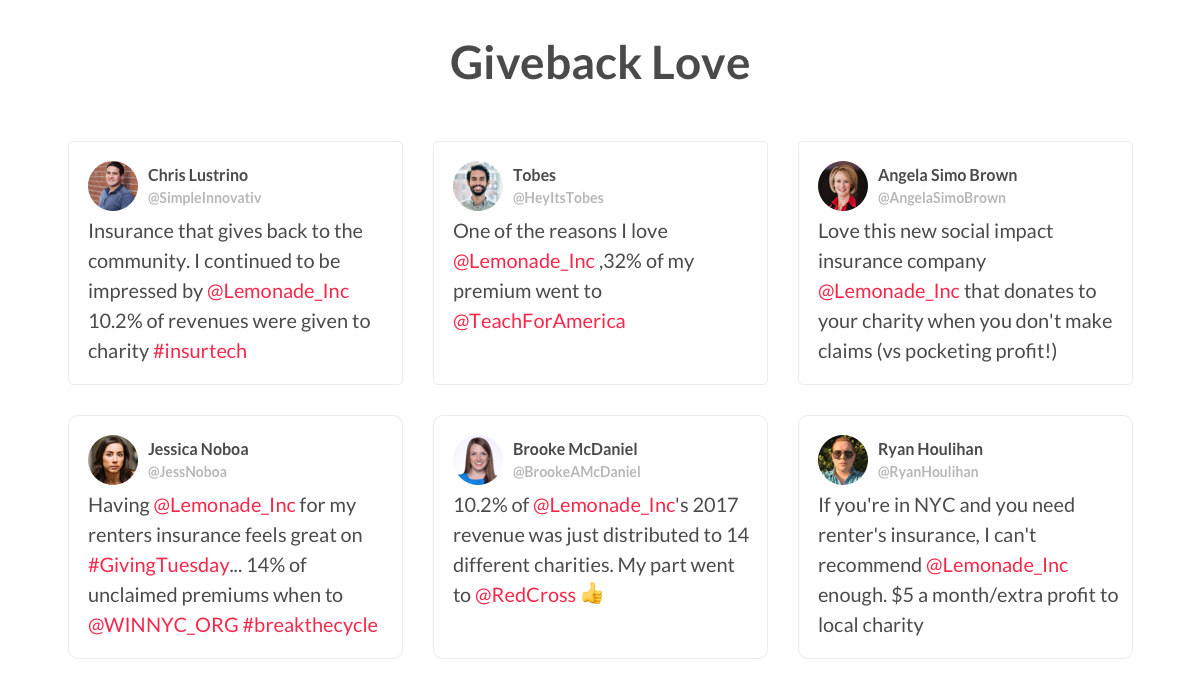 If you already have a Lemonade policy but haven’t selected your Giveback cause, make sure you download the Lemonade app. You’ll be prompted to pick a cause you care about and will have the opportunity to read more about each one. If you don’t have Lemonade yet, scroll through our list of causes below, choose one you’re passionate about, and get a Lemonade policy in seconds.

The Lesbian and Gay Federation in Germany (LSVD) is the largest non-governmental LGBT rights organisation in Germany. They work to help lesbian, gay and transgender people gain recognition as a natural part of social normality and attain full legal equality. The LSVD takes a stand when the interests of LGBT people are affected by the Federal Government, the Bundestag, and the Federal Constitutional court.

Viva con Agua de Sankt Pauli e.V. is a nonprofit organization committed to ensuring that all people worldwide have access to clean drinking water. To achieve this goal, they promote water projects and activities at home and abroad. They firmly believe that even serious topics in the world can be treated with joy.

World Vision Germany partner with children, families, and their communities to reach their full potential by tackling the causes of poverty and injustice, regardless of ethnic origin, religion or nationality. With energy and passion, they work to empower people out of poverty and promote human transformation.

Start Coding promotes digital education in a hands-on manner to look beyond the surface of digital products. They encourage kids, educators, parents and the elderly to use programming and electronics to design their own creative applications in music, games, making and art in workshops and events across Germany.

Foodsharing e.V.’s mission is to fight everyday food waste and raise awareness around this issue. They offer a free online platform that saves and distributes surplus food in Germany and other countries, allowing volunteers to pick up food from businesses and distribute it through public storage places called Fair-Teiler.

ReDI was founded in 2015 on the belief that technology can break down barriers, and bring people together to build new solutions to old problems. The idea of ReDI was sparked by the insight that amongst the refugee population there are incredible talents eager to learn and eager to contribute, who could help open IT jobs in Germany.

Founded in 2015 by IT journalist Mike Butcher, Techfugees is an impact-driven global organization aimed at the inclusion of refugees and displaced people in the tech industry. Thanks to its worldwide community of volunteers, Techfugees deploys its activities, programmes and events, including tens of hackathons and its Global Summit and Challenges, in more than 18 countries across the world.

Tons of food is destroyed in Germany every day. The Tafel works to stop food waste, by collecting and distributing leftovers to disadvantaged people nationwide. There are currently more than 940 Tafel in Germany, supporting more than 1.5 million people in need of food – including thousands of women and children.

Teach First Germany is a non-profit which is committed to equal opportunities in education. Their volunteers work in schools in socially disadvantaged areas, providing support in the classroom, giving self-confidence through joint projects and helping to make plans for their professional future.

One Earth – One Ocean

With the “Marine Litter Cleanup“ the German NGO One Earth – One Ocean has developed and tested a concept for the collection and recycling of plastic waste from the waters. Special waste collection ships collect the plastic waste, which is then returned to the material cycle.

The German Red Cross is part of the largest global humanitarian network and provides extensive assistance to people in need, both worldwide and in Germany. Whether in disaster situations, conflict situations or long-term projects, the German Red Cross is always close to the people and is committed to their lives, health, well-being, protection, peaceful coexistence and dignity.

Right To Play is an international children’s aid organisation. Through play & sport, they impart vital knowledge and skills to children affected by poverty, disease and war – for a better future and sustainable change on the ground.

Pro Wildlife is committed to preserving biodiversity and saving wild animals in need. The German organisation supports wildlife conservation projects worldwide, working to preserve habitats and raise awareness around the importance of protecting wild animals. They also engage with lawmakers around containing the exploitation of nature.

Doctors Without Borders provides emergency medical aid in crisis and war zones and after natural disasters worldwide. They help quickly, efficiently and unbureaucratically – without asking about origin, religion or political convictions. Doctors, nurses, midwives and logisticians work in around 70 countries, treating the sick and wounded, caring for malnourished children and providing clean drinking water.

Reporters Without Borders promotes and defends the freedom to be informed and to inform others throughout the world. Based in Paris, it has an international network of correspondents in 130 countries. RSF is now one of the world’s leading NGOs in the defense and promotion of freedom of information.

The German AIDS Foundation is a foundation under civil law that helps HIV-positive people and people suffering from AIDS in material need. In addition, its aim is to create public awareness regarding HIV/AIDS, to inform and educate in order to reduce new infections and to help those affected gain greater acceptance in society.

The German Animal Welfare Association is Europe’s largest umbrella organization which is committed to animal protection and nature conservation. The nonprofit advocates for the active protection of local animals as well as the end of animal suffering in Germany, Europe and worldwide.

Ozeankind® e.V. promotes environmental education and recycling projects for children. Since 2018, the association has engaged in a wide range of activities and initiatives for increased awareness on how to handle disposable plastic, like regularly organizing international cleanup events.

The DKMS (German Bone Marrow Donor Center), is a non-profit organization dedicated to the fight against blood cancer. Its goal is to find a suitable stem cell donor for every blood cancer patient in the world and to improve patients’ well-being. In addition, the DKMS supports the development and research of treatment methods for blood cancer.

Holocaust survivors’ personal stories can contribute to societal change. They enable young people to better understand history and learn from it. ZWEITZEUGEN e.V. ensures that survivor stories will live on. The organization encourages and enables (young) people to become second witnesses and to take a stand against antisemitism.

Btw, if you don’t see your favorite cause on our list, let us know – we’d love to see if we can help support them too through our Giveback program. Drop us a line at [email protected]

Bicycles, laptops, cameras - you want to protect all your valuable stuff!. Here’s why contents insurance in Germany is important, and what you should pay attention to.

Here's how to create habits that will reduce your plastic usage, and improve the planet for generations to come.