Putting off buying insurance until you know you need it is a common phenomenon, and for some people, may even feel rational at the time. People think – ‘why invest in something now for a risk that may never happen in the future?’

But when something does happen, your rationalization changes. You see a disaster coming, and you want insurance NOW!

The apartment next door is on fire. You hear some rumbling in the radiator, and that loose steam valve looks like it might blow. Your laptop is stolen, and it occurs to you that renters or home insurance might be just the thing you need.

It could be worse: a wildfire is a mile away, and you’ve started to evacuate. Now is not the time to buy insurance. It’s time to get out of harm’s way. Something has started, and there is a reasonable expectation that you may lose stuff or property. Unfortunately, it’s probably too late.

Prospect theory can explain when we’ll get insured

Rational or not, when we decide to get an insurance policy can be explained by science. Behavioral economists Amos Tversky and Daniel Kahneman call it ‘prospect theory,’ which determines how people decide between risky alternatives based on what they perceive as ‘gains’ or ‘losses,’ rather than absolute outcomes.

Turns out, losses make us more miserable than gains make us happy

Back to insurance. We rationalize to ourselves whether paying for something that may or may not happen is worth it. Our rationalization process starts by thinking about the probability (between 0-1) of a certain event occurring. Instead of seeking the probability of something happening, we tend to categorize it as “won’t happen, will happen.”

For very low probability events, such as a wildfire or flood, we tend to round the probability of it happening down to zero. We can’t psychologically accept that something like this may happen, and often ignore the fact that this event could occur at all. No need to get a policy for something that we perceive as never happening.

Conversely, for an event we perceive as having high probability – we’ll round it up to 1, and exaggerate the difference between 0-1.

This is why many people view their insurance payments as a loss for an unknown gain – you’re losing $5/month for something you don’t expect to happen, like a fire or flood. In this case, you will opt not to get coverage, viewing it as eliminating an unnecessary monthly expense. You’ll perceive not getting coverage as a gain.

But this all changes when a low probability event – say a wildfire or flood – does happen to us, or even to someone we know. We witness the low probability event unraveling, and the odds now seem much higher. Suddenly, paying a monthly insurance premium appears to be a gain in the face of a huge loss.

Because of this, people tend to purchase renters or home insurance only after a disaster, and cancel their policies several years later when they perceive the likelihood of a disaster as low again.

Exhibit A: the median tenure of flood insurance is between 2-4 years, while the average length of time in a residence is 7 years, according to an in-depth analysis of the entire portfolio of the National Flood Insurance Program.

So why is it that after facing a risky event, getting property insurance suddenly seems worth it (even though the odds of this risky event are still the same)? Tversky and Kahneman call this the “framing effect:” identical situations generate dramatically different decisions depending on whether you see the situation as a potential loss or gain.

The same logic applies to property insurance. When paying a monthly insurance premium is framed as a gain – pay now for help later – you’re more likely to avoid the risk and take up insurance.

But when paying a monthly insurance premium is framed as a loss – losing money every month – you’ll take the risk and won’t get an insurance policy. 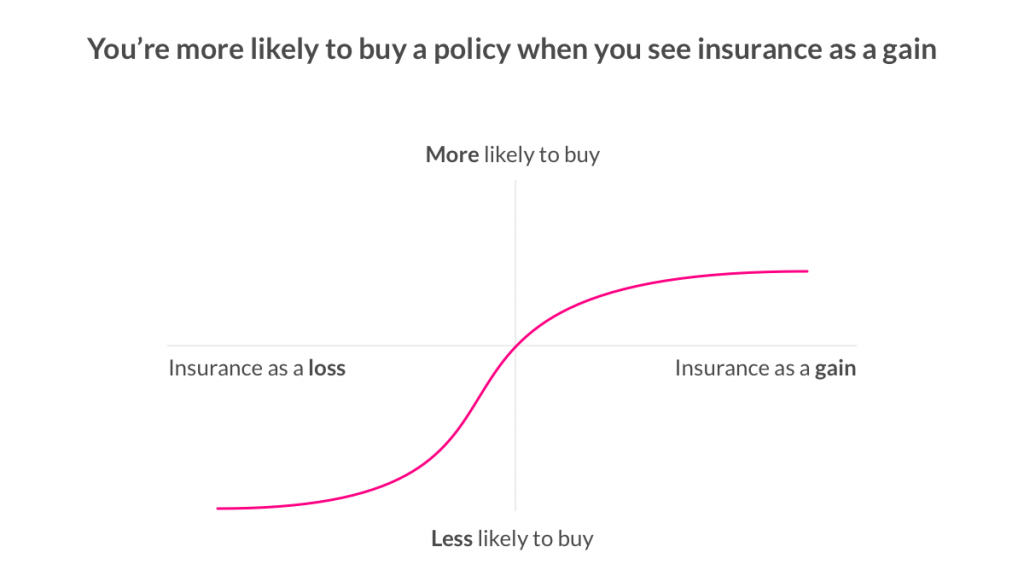 Why do insurance companies care?

Insurance companies have the responsibility to properly price risks, but also to protect you against unknown events that might happen to you – and hopefully never do.

Although we pride ourselves on being fast, easy, and available 24/7, covering damage already in progress (i.e. mold creeping up in your bathroom) is not allowed by the policy. And if we did cover it, we would be doing a disservice to our members and the charities they support, and it would raise policy prices.

Recognizing our human biases can let us know when our decision-making is triggered by irrationality, or skewed framing of a certain event. If we understand these biases, perhaps we’ll be less prone to making these classic human errors that often have costly consequences.

So the next time you are considering to buy renters insurance online, or wonder if it’s a good investment – just know, there’s no time like the present.

Get Renters Insurance from Lemonade

Protect your stuff if it gets damaged or stolen. Receive quotes in seconds, and get covered without the paperwork.