If you’ve ever heard of the “Ides of March,” you probably know it’s something to beware of. But did you know it actually has to do with finances?

While the Ides are most famous for the death of Julius Caesar, the Romans considered this a time for settling debts. Fitting, as March is the month we start thinking about some accounting of our own – taxes.

But beyond “beware,” April 15th is a day many of us dread: Tax Day.

Did you know one in four tax returns get filed within two weeks of the deadline? And those numbers don’t even include extensions (which, by the way, is an additional 10 million households).

Now, get this: according to Google Trends, “procrastination” peaks in popularity each year from March through late April.

Surprising? We think not. 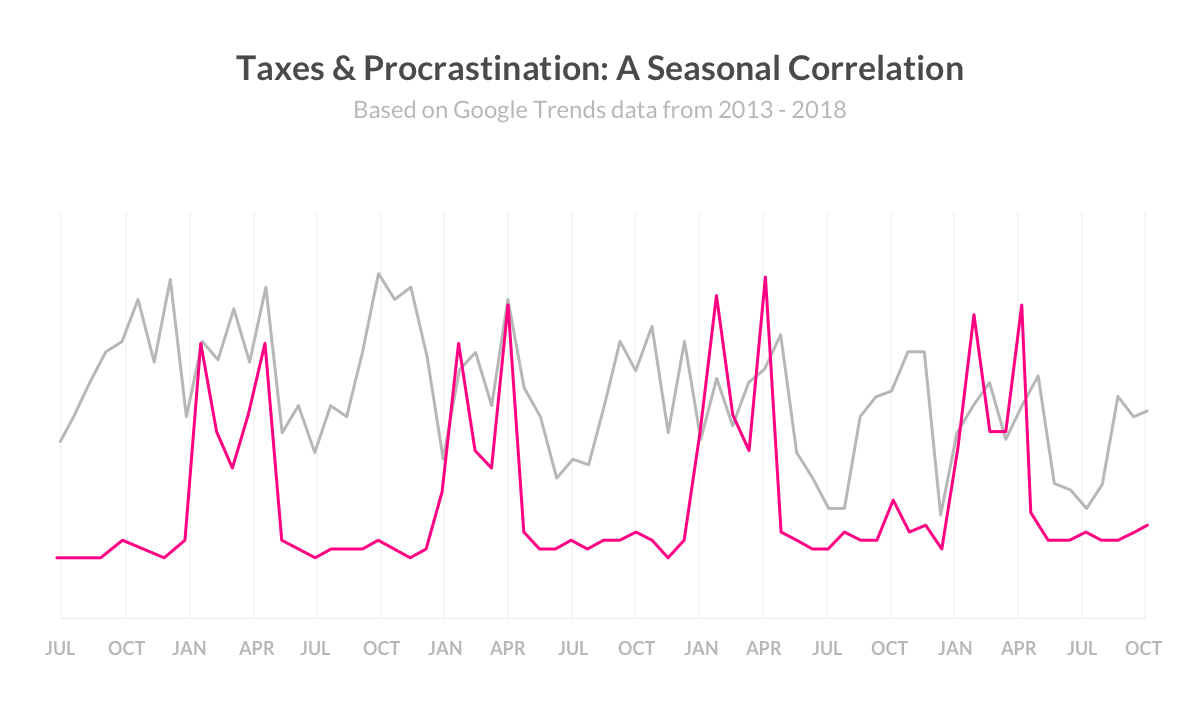 It begs the question: Why do most people wait until the last minute to do taxes? If you miss the deadline, you’ll end up paying an extra 5% per month. Also, your chances of overpaying are much higher when you do things last minute.

So how can we beat procrastination once and for all, and get our taxes in on time? We’re going to break it down, backed by behavioral science, of course:

Think of your one friend who’s a token procrastinator. What do you think is the main factor behind his or her behavior? Laziness? Overconfidence? Adrenaline junkie? While one of these may seem like the root of your friend’s issue, it isn’t. It’s just side a effect.

According to our Chief Behavioral Officer Dan Ariely, your run-of-the-mill procrastinator simply struggles with misaligned incentives between short-term rewards and long-term goals. In other words, they favor short term feelings over their future self.

Studies concur. Poor financial choices, like putting off paying taxes, are associated with high levels of in-the-moment-living. (American Psychological Association) And the strongest predictor of smart financial decisions isn’t our level of financial literacy – it’s how often we stop to think about the future.

Read: you’re not alone – even financial advisors or economists may have some trouble when it comes to filing their taxes! It simply depends on how future-minded they are.

The first step to kicking your tax procrastination habit is publicly declaring when you’re gonna pay up.

Research by Prof. Ariely found a strong correlation between making a public commitment and following through on your stated goal.

How can you go about creating this public commitment? We suggest posting about your goals on social media – or even doing a countdown – and tagging your friends (pay it forward, right?).

Not a fan of the social approach? Tell your roomie or family that you’ll finish up your 1040 by a certain date, and to be ready to go out and celebrate (on you!). This way, you’ll be accountable to others, and will feel more energy and motivation to get it done on time.

Public declaration made. Now what?

Getting to the zen of taxes

If you want to beat procrastination, you have to find a way to make your present self act in the best interest of your future self. Here are a few tips from some of our favorite scientists:

1. Visualize your future self

In a psychological study, one group of college students was shown images of their own faces, digitally altered to appear 50 years older. The second group was shown unaltered images of themselves. Those shown a glimpse of their future selves said they would allocate about 30% more money on average to their 401(K) than the students who were shown pictures of their current selves. 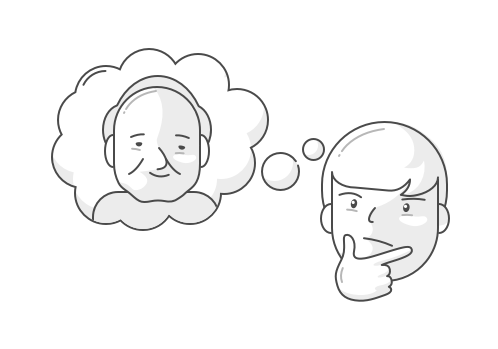 Magnus Herschfield, the pioneer of this study, concluded, “anything that we can do that will increase how concrete and salient our future self is – that’s the type of thing that can help us make better decisions.”

Takeaway: when it comes time to sit down and do your taxes, picture your debt-free self planning a vacation to some warm, exotic destination. It’ll help you power through. Alternatively, if you need a little help, or require a visual, try downloading an aging app on your phone, take a selfie, age yourself, and keep it handy in event of procrastination.

2. Use days as your unit of measurement

Psychologists Neil Lewis of the University of Michigan and Daphna Oyserman of the University of Southern California examined the dissonance between long-term goals and short term behavior in a recent study published in Psychological Science. They found that if people considered far-off events from the perspective of days rather than months, or years, they acted more quickly.

In one of the studies, half of the participants were instructed to imagine they had a newborn child that would begin college in 18 years; the other half in 6,570 days. In alignment with the original hypothesis, “parents” who considered their “children’s” college from the perspective of “days” planned to start saving four times sooner than their counterparts planning from a “years” perspective.

Now let’s apply this to your income taxes. Here’s last year’s schedule of all major tax due dates: 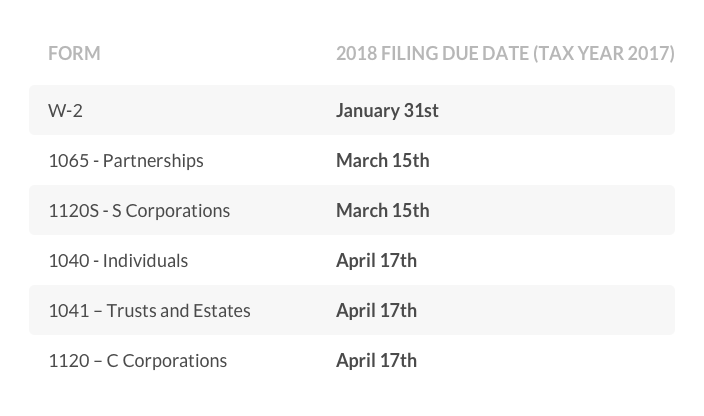 Next step: start a countdown! Our suggestion is to set a reminder each day that tells you the number of days you have left. Sound annoying? Try a weekly or monthly reminder, but just make sure to use days rather than weeks or months are your unit of measurement!

3. Automate the tasks you tend to procrastinate

Another way to get better at prioritizing your future self is to make it your default option.

When you owe the IRS a big chunk of change, it’s hard to fork over the cash, especially when you haven’t saved up. How to fix this?

“The lesson from behavioral economics is that people only save if it’s automatic,” said behavioral economist and Nobel Prize winner Richard Thaler. “If you want to help people accomplish some goal, make it easy.” Dan Ariely agrees. “We should just take [15, 20, or 25% of our salary] out of our paycheck directly, automatically, without paying attention. Put it into a different account, don’t think about it.”

Once you have a nice buffer in the bank, it’s a whole lot easier to pay your taxes on time. We like Prof. Ariely’s recommendation of automatically setting 15% aside each month; in addition, it’d be smart to set aside a small piece of any cash windfalls, or unexpected gains you may receive throughout the year – it may even come in the form of a tax return!

Fun facts: about eight out of every ten tax returns filed in 2013 got a refund and, according to The Conversation, there is an 85% chance you either owe nothing or will get money back, which gives you better odds that many state lotteries!

Another thing to “automate,” if you just cannot bring yourself to sit down and crunch the numbers, is the tax process itself. Long gone are the days of scribbling numbers down on a handful of IRS forms and schedules – there are tons of apps out there that’ll help you with filing your taxes and they are just getting better and better. Intuit’s TurboTax app and H&R Block’s mobile app are both great options, not to mention personally tested by some of us here at Lemonade.

Taxes have never been faster or easier to check off your to-do list. It’s up to you to make a declaration, set a date, and when you feel that itch of procrastination creeping up, visualize your future self.

To Pay Off Student Loans, Trick Your Brain

How to Save More Money Every Month

Where can you cut some of your expenses while at the same time not reducing your quality of life too much? Look first into going out.

This is When You’re Actually Most Productive

Feel like you’re not getting enough done? This simple hack will increase your efficiency and push your productivity to the next level.