In the quest for life, liberty, and the pursuit of happiness, the latter has inspired a hotly-debated scene of gurus telling us how to be happy.

In recent years, Positive Psychology has yearned to scientifically conclude how to make miserable humans into happy ones, and how to make happy people even happier. The annual United Nations-backed Happiness Index is proof that the happiness factor is becoming a more telling indication of how we’re doing as a society (btw, the US is tumbling, down four spots from the previous year, ranking 18th on the 2018 list).

Yet, while we actively pursue happiness, we may more often than not encounter misery, rather than avoid it, science shows.

That’s because pursuing happiness can actually make us more lonely. Psychologist Dr. Iris Moss concluded that since happiness is an individual pursuit, constantly striving for personal gains can damage connections with others.

Wanting to be happy can actually make you less happy.

Take this experiment conducted in the late 70’s and made famous again by psychologist Dan Gilbert’s 2004 TED talk. Researchers studied two groups of people: Recent winners of the $50,000-$1 million lottery, and recent victims of catastrophic accidents, who are now paraplegic.

The initial happiness levels for both groups is obvious; less so is what they felt a year later. The recent accident victims reported gaining more happiness from everyday pleasures (things like chatting with a friend, watching TV, eating breakfast, laughing at a joke, or receiving a compliment) than the lottery winners.

Why is that? The study’s authors coined the term the ‘hedonic treadmill:’ our tendency to quickly return to a base level of happiness, even after major life events. In other words, we adapt to the things that make us happy, until they don’t really make us happy anymore. For lottery winners, as the thrill of winning fades away, day-to-day life seeps back in. 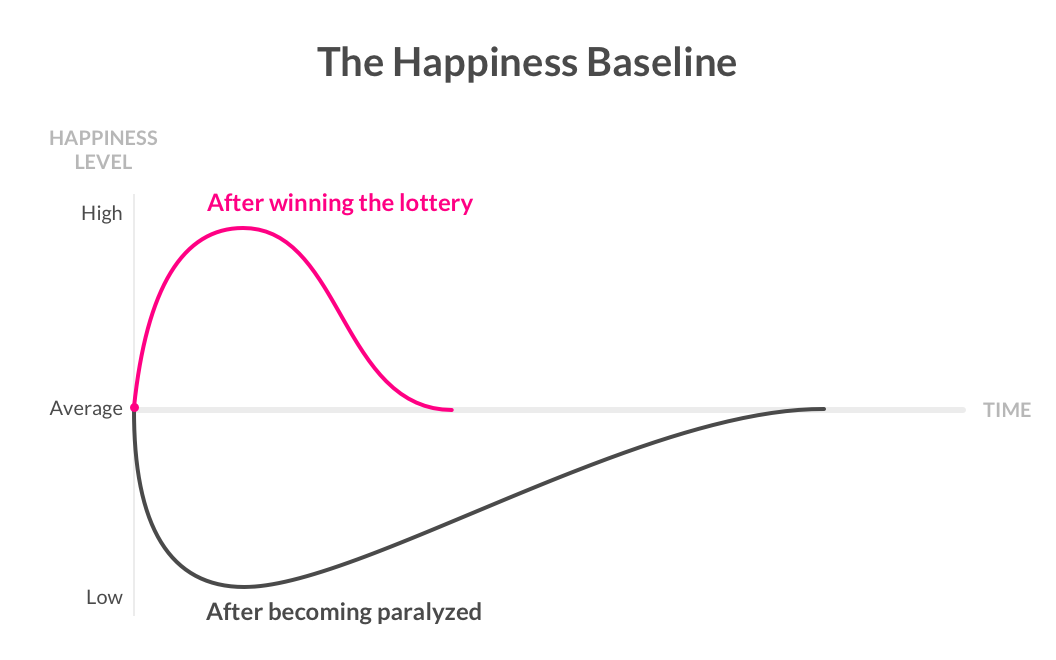 Dan Gilbert says this shows happiness can be synthesized. As humans, we have a psychological immune system that helps us change our views of the world, so we can feel better about our decisions. It kicks into gear when we experience negative events, but also brings us down after happy events. That’s because we have a happiness baseline, so anything we think makes us happy (Money! New car! Bigger apartment!) will be thrilling at first, but eventually we’ll adapt and look for a new source of happiness.

So if we’re able to synthesize happiness, why do we think happiness can be found?

The pursuit of happiness + meaningfulness

The researchers asked Americans if they thought their lives were meaningful and/or happy. The results, over 30 days, showed that a meaningful life and a happy life overlap in certain ways, but are ultimately very different.

Meaning was defined by participants as giving a part of themselves away to others and making a sacrifice on behalf of the overall group. It was about transcending the self and the present moment. It was long-lasting. Alternately, happiness is a fleeting “here and now” feeling. The researchers also found that on the spectrum of givers and takers, pursuing a life of happiness is associated with a “taker;” pursuing meaning is more of a “giver.”

While happiness and meaning often feed off each other, pursuing a happy life actually looks very different than seeking a meaningful life.

In her book “The Power Of Meaning: Crafting A Life That Matters,” author Emily Esfahani Smith states while we tend to equate searching for meaning with a getaway to a silence retreat, or sifting through endless books to discover life’s secrets, “the truth is, there are untapped sources of meaning all around us—right here, right now.”

While a happy life is focused on seeking current pleasure and enjoyment, a meaningful life is defined as investing in something bigger. That means connecting and contributing to something beyond the self, which could be your family, work, nature, religion, etc.

Meaning isn’t something you have or don’t have: it’s a mindset.

Think about it: while happiness is about the present (do I feel happy now?), meaningfulness is about linking the past, present, and future. So living without meaningfulness is characterized as a relatively shallow and self-absorbed life: Prioritizing immediate satisfaction and avoiding any conflict is all in all a pretty selfish lifestyle.

Concentrating only on meaning has its consequences, too. When people spend time thinking about the future or past, the more meaningful, and less happy, their lives become. That’s because they’ve invested in something bigger than themselves. This leads to greater worry and higher levels of stress and anxiety. In other words, it’s possible to be unhappy and have a meaningful life: you’ll make positive contributions to society, but through stress and struggle.

This isn’t to say we should choose happiness or meaningfulness, but rather seek out a happy and balanced harmony of both. Social science shows that synchronizing between the two is not only possible, but also good for your health.

This coincides with the philosopher Aristotle’s happiness and virtue theory from over 2,300 years ago: Aristotle linked between the concepts of happiness and virtue, arguing that the most important factor in an effort to achieve happiness is to have a good moral character — what he calls “complete virtue.” Thus, happiness is not pleasure, nor is it virtue. It is the exercise of virtue.

Researchers also noted that while both animals and humans pursue happiness, the pursuit of meaning is unique to humans. Therefore, living a virtuous life is what makes us human beings uniquely human. Setting aside some of our self-interests at times for something larger than ourselves will create more meaning in our lives, which will ultimately make us happier.

One of the best ways to achieve this is to give back to our community.

At the turn of the century, The Guardian came up with 100 things we can do to change the world, and volunteering is a noted activity on the list. In fact, researchers at the London School of Economics found that the more people volunteer, the happier they are. In the study, they found the odds of being “very happy” are 7% greater among those who volunteer monthly, and 12% greater for people who volunteer every two to four weeks. Among weekly volunteers, a hike in happiness was also noted: 16% felt very happy.

But there’s no denying that it’s tough to put aside our selfish selves – it can feel time-consuming, irrelevant to our day-to-day, and even unimpactful (what can I possibly do that will make a difference?). We find ourselves wondering, can one person make an impact on the world, without feeling like a mere drop in the bucket?

Lemonade’s Chief Behavioral Officer Dan Ariely says that to make the greatest impact, we should choose activities that are socially visible to other people. That’s because being a giver, rather than a taker, is contagious. Science shows that giving behavior sparks similar behavior among others around us. So volunteering in a way that’s visible to others will not only have a direct impact on your own happiness and meaning, but a wider social impact.

We gathered the easiest ways to start that drop in the bucket and make it visible for your network, together with Lemonade’s Giveback partners. These almost instant tips to adding more meaning to your life are actually contributing to people and issues bigger than ourselves, while strengthening long-term happiness.

Your birthday is a great opportunity to add meaning to your life. If you donate your birthday to charity: water, you’ll  provide access to clean water for those in need! Once you make the donation, tell your friends – your good deed may inspire them to act similarly.

2. Ask your friends to give

Another way to give on your birthday is to ask your crew to donate in your name, instead of giving you a gift. Doing so will have that double-whammy effect of bringing you meaningfulness, and inspiring your friends as well. NYSPCC, a nonprofit working to respond to the complex needs of abused children, has a great system for this: If you ask friends to bring a toy and/or a $10-$20 donation for your birthday, they’ll put it towards helping children under abuse and neglect.

Sharing your impact with your social network is a sure way to leverage the power of normative influences – if your friends see you doing good, they might just follow your lead (and even post about it themselves!). Our friends over at New Story, a nonprofit that works to ensure no human lives in survival mode, put together email and social media templates for you to share with your network, so you don’t even have to get up from your chair to create an impact.

Donating your time to a nonprofit will bring you high levels of meaningfulness, especially if you’re interacting with the people you’re helping. Women in Need, an NYC-based nonprofit, is always seeking volunteers to help homeless mothers learn income-building skills and to bring fun, educational after school and camp activities to WIN children.  Call on your network to come with you on your next volunteering outing.

Sometimes, just talking about a charity gets others motivated. Our friends over at Code To Inspire, who are working to educate females in Afghanistan to get involved in entrepreneurship and technological innovation, say that when their supporters simply talk about the personal stories or experiences, they immediately become an ambassador, and that leads to friends-of-friends support.

Meaningful pursuits, like donating your time and resources to a nonprofit, require sacrifice and effort, and can even be frustrating at the time. But when you reflect back, the pursuit of meaning will be more satisfying than chasing happiness.

How Deep is Our Love?

Determining the perfect gift can be quite stressful. Here are some findings from social science that we should take into account when buying gifts.

2016 was an incredible year for Lemonade. Want the details? We will be revealing all in our Lemonade Transparency Chronicles.