As a teenager, I used to frequently visit the local Tower Records store on my way home from school. Back in the day, Tower was the go-to place for all things music. Living on a budget, buying a CD was a significant expense that required me to puppy eye my parents for extra cash on a weekly basis. Buying music was too expensive, and more often than not, I felt somewhat cheated into getting the full album, when all I really wanted was to listen to a track or two.

Russ Solomon, Tower Record’s founder, used his father’s drugstore in the back of Sacramento’s iconic Tower Theater building to start his record business back in the 40’s. He did well and gradually started opening up new stores across the US. At its prime, Tower grew to become a large company, bringing in more than $1B in annual revenues with hundreds of stores spread across the globe, including the one next to my parents’ house.

As Tower focused on increasing their company’s revenues by selling more CDs and opening up new stores, little did they know that a scientific discovery 5,000 miles away would change the world of music forever, and with it, the fate of their company.

On November 26, 1996, Bernhard Grill and a few of his colleagues from the Fraunhofer Institute for Integrated Circuits in Erlangen, Germany filed a patent for a revolutionary new digital audio format called, the MP3. Then came bit-torrents and piracy, iPod and iTunes; a couple of years later, Tower Records went under and filed for bankruptcy. Russ’s company was in the CD sales game, and they were playing it extraordinarily well. What he and his team couldn’t see coming was the arrival of a new game; one with a different set of rules, for which they had no answer.

The name of that new game was tech disruption, and whoever mastered it first became unstoppable, like Apple and Spotify.

If you’ve been fortunate enough to work for a startup company and a large corporate, you’d know that there are big differences between the two. Visiting a startup, you can’t help but noticing the magic in the air and everyone’s bright-eyed passion, ownership, creative thinking, sense of urgency, and speed of execution. Smaller teams have these in abundance, but as companies turn into corporations, they become slower, and people become comfortably numb.

I don’t want this to happen to us at Lemonade. We want to continue providing a great product, caring about every pixel and every word, taking risks, building crazy smart tech, and constantly improving our customer experience.

But, there’s a real challenge here. How do you maintain everyone’s passion for those things when your company is making one billion in revenue? How can you make sure your team is the one who discovers the next MP3 of your industry?

For that to happen, there needs to be a way to keep people focused on doing big things, while maintaining a startup atmosphere. That’s hard when you’re small, and impossible when you’re too big, so we set out to build a new type of organization. One that tries to borrow from the good of both worlds — maturity and scale from corporations; agility, creativity and raw passion from startups. We think it’s the next evolutionary step in the development of organizations, and it has to do with AI.

A change is coming

Try to think how your life looked, only 25 years ago. There was no iPhone, no App Stores, no Facebook, no Amazon, no Twitter, no Big Data, no Google, no cloud, and certainly no AI. Going back even further, say 90 years back — you get to when the large US corporations, such as insurance companies and banks, where founded. Back then, executives had a simple formula — make money, hire more people, make even more money, hire even more people.

But, times are changing, and like my old CD player which fell into disuse, organizations that won’t move away from this century-old way of thinking will find it very hard to compete with a new breed of businesses that are built on the foundation of technology, and not on headcount.

Driverless cars, robotic warehouses, self-driving trucks, and autonomous ships are going to become an integral part of our lives sooner than most of us realize. But, what we now discover about autonomous technology is that it reaches far beyond eliminating manual machine operation.

When there are no drivers, there will be no need for car ownership, and with that, no need for parking, gas stations, or garages. Merely changing how we drive cars will affect how we design our future streets, highways, and cities.

But there’s one area which is still largely ignored by AI innovation, and that is the organization itself.

If you spend the better part of your day in an office, try to think about all the repetitive tasks you do each day: gather data, update your peers and manager, compose reports, fill out forms, coordinate events, track progress, order stuff, sign documents, send out purchase orders.

Today, most of these tasks can be automated by bots.

The rise of the Autonomous Organization

As a well-funded company, there’s always temptation to hire more people. I find myself fighting my instincts to do so, on a daily basis. Both my co-founder, Daniel, and I, often remind our team and investors that we want to build a different kind of a company. One with less people and more code, and that is driven by ultra smart, carefully selected small group of humans who together engineer a lean David rather than a brute Goliath.

As innovators, it’s our job to push back when we feel that our team drifts away from this vision, or as Daniel nicely puts it, get pulled by the ‘black hole.’ It’s the average and norms that we should be wary of, not the different and the new. After all, these kinds of fears are what brought the industry we’re trying to disrupt to what it is today.

The first place to receive autonomous treatment is our engineering workflow. It’s exciting to see an entire engineering team that is driven by a bot, and not a scrum master!

Meet Cooper, our internal automation brain that handles and delivers tasks to production in record speeds. Cooper helps our developers manage the work flow between Product, Engineering, Automated Testing, and QA. It assigns tasks to team members, prepares testing environments in the cloud, runs tens of thousands of automated tests, and deploys everything to the hands of our customers when ready. 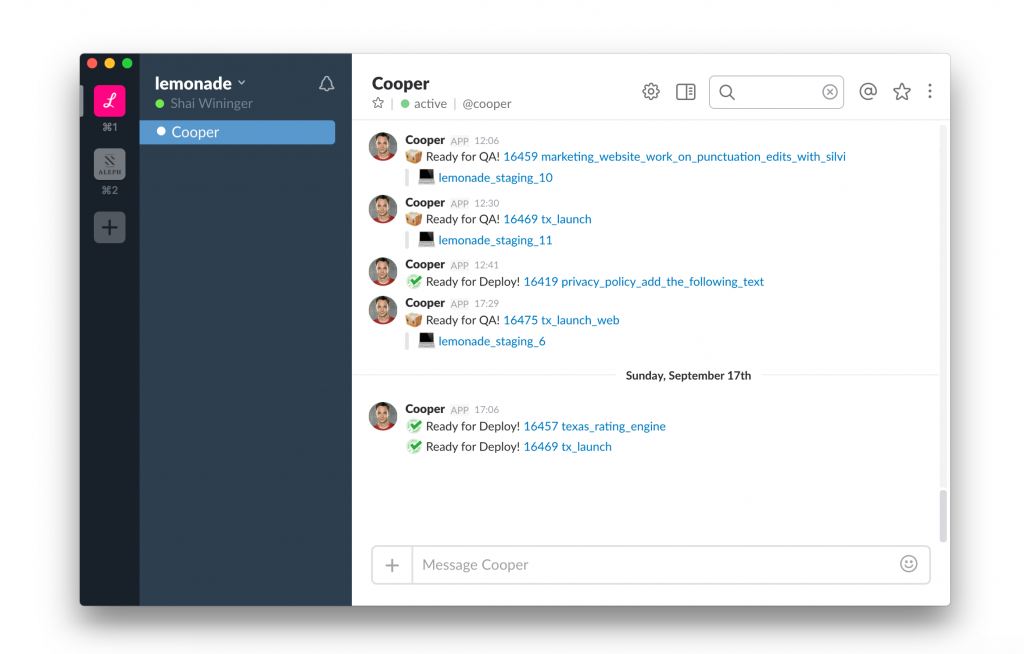 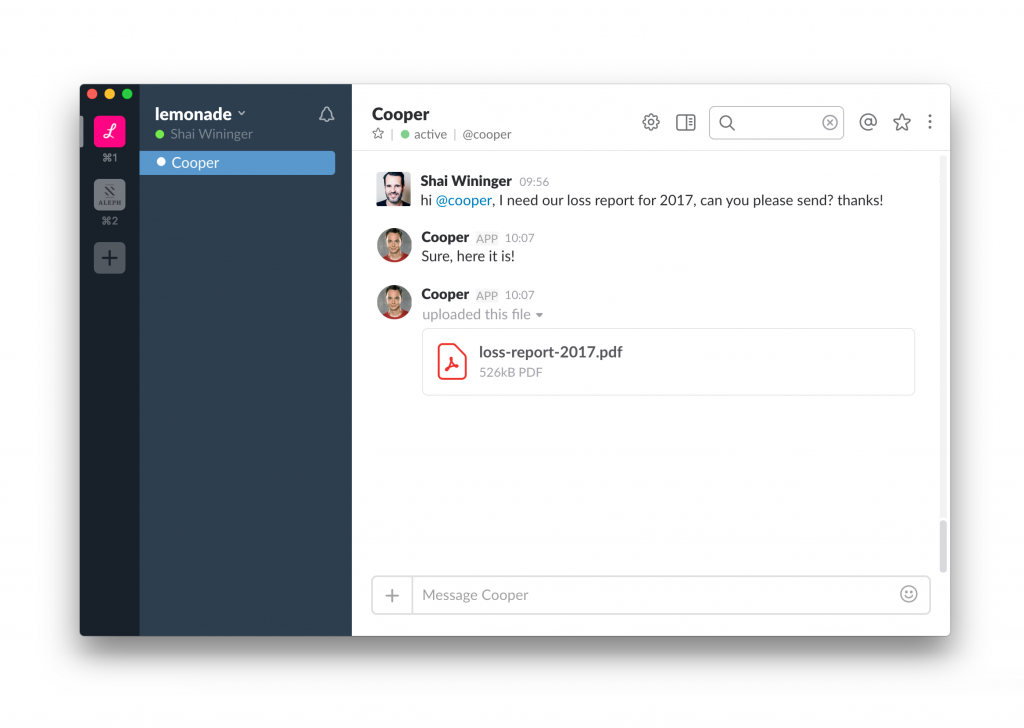 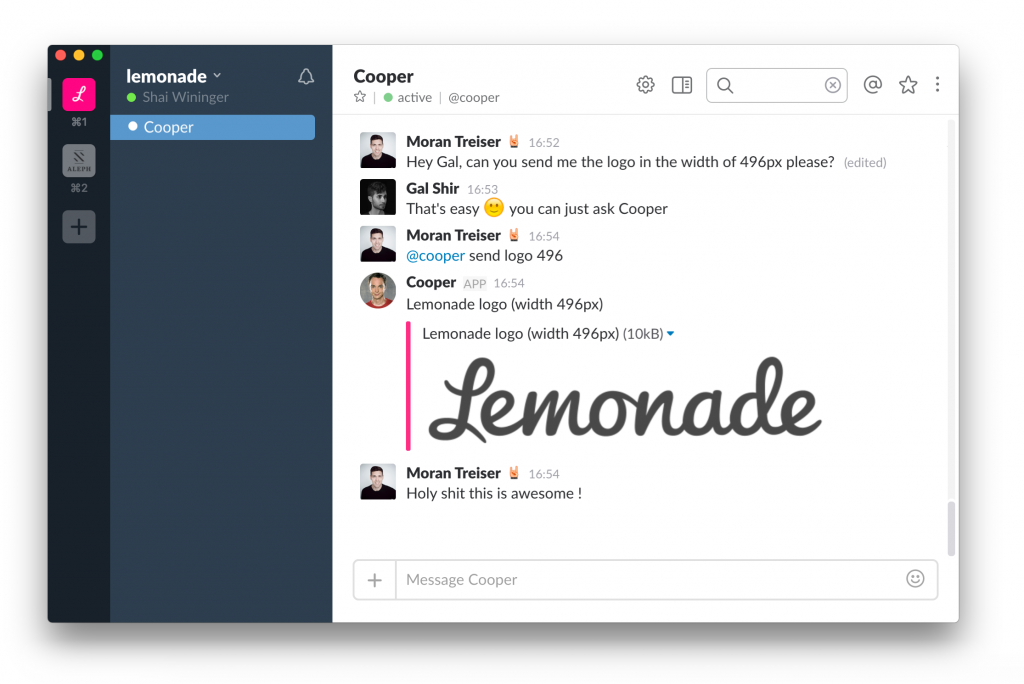 A random conversation I picked up on Slack the other day

Just like any other project, we wanted to measure our progress and success as we implement our vision. We started by tracking a simple ratio between the number of our Lemonade employees and active users in the system (also known as policyholders). We call this, our Automation Index.

The Automation Index helps us focus on being more efficient. The higher the number, the more scaleable we are. Constantly tracking and discussing this metric helps us push the team into solving problems using AI, instead of HR. 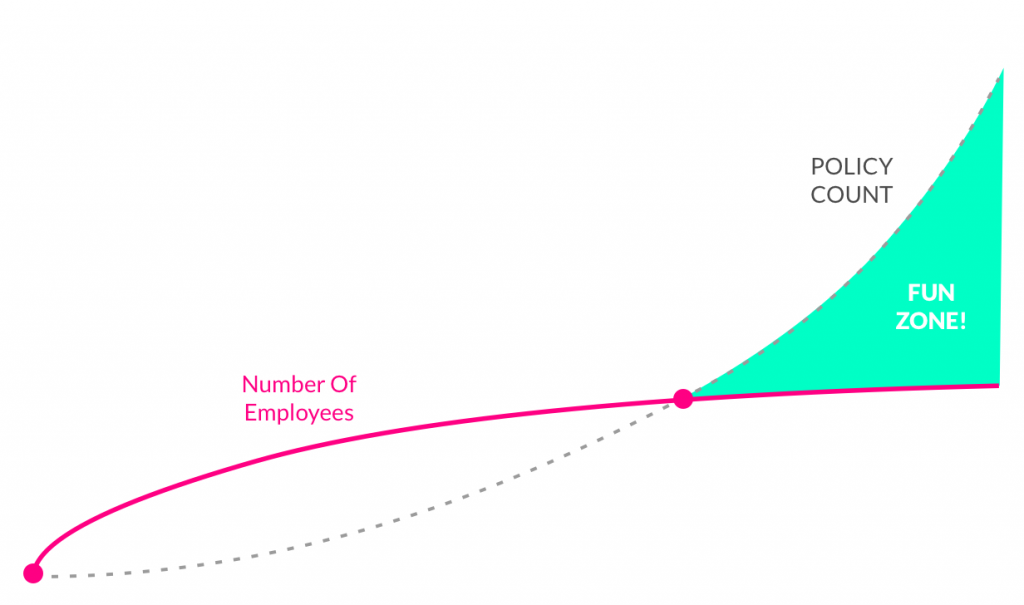 A final word (of caution)

There is a looming risk if this is done without care and sensitivity. I can imagine a scenario in the not-so-distant future where corporations would gradually shed their human side, in favor of becoming more efficient. Such an organization could decide to have people report to bots as their managers. Bots would constantly evaluate human performance by comparing them to thousands of others humans doing the same job. I wouldn’t want to live in a world where people are hired, or fired, by an AI.

Just as with other revolutions in history, whenever we became stronger as a species, we also become more vulnerable. The forging of metals helped us create bridges and essential tools, but it also brought swords and guns. Our understanding of chemistry led to the pharmaceutical revolution, but it also pushed us to create WMDs.

As the famous cliche goes, with great power comes great responsibility, and it’s really up to us entrepreneurs and thought leaders to keep using AI for good, making more room for our humanity, instead of the other way around.

An edited version of this article was originally published in The Next Web.

We set out to design the Lemonade system in a way that would endure any kind of platform we throw at it, whether it’s a mobile app, a cash register, or a car navigation system.