Is enjoying work an oxymoron?

It is for the majority of Americans: 87 percent don’t feel engaged in their jobs, according to a Gallup poll.

It’s no wonder that a vast majority (87 percent) of organizations cite culture and engagement as one of their top challenges, according to Deloitte Insights.

So if this is a top priority for employers, why are most employees still disengaged?

“Work is structured on the assumption that we do it only because we have to,” psychologist Barry Schwartz explains in the New York Times. But to create an engaged workforce, companies must foster a sustainable, permanent culture of caring on a daily basis.

The science behind work satisfaction

Consider a study by Behavioral Economist Dan Ariely (and Lemonade’s Chief Behavioral Officer), where he sent factory workers one of three emails: The first promised workers a free pizza if they get all of their work done, the second promised a rare compliment from their boss, and the last – a cash bonus.

Which did the best job of motivating employees to get their work done?

If you thought the cash bonus, you thought wrong. The pizza and thank you note were the strongest motivators.

While monetary incentives are usually attributed to getting workers’ feet in the door in the first place, cash hardly contributes to an employee’s engagement at work: “You’re just as likely to love your job if you’re making $30,000 a year as if you’re making $300,000,” explained psychologist Arthur Brooks in an interview with The Atlantic.

Pizza and compliments give employees a temporary sense of appreciation and meaning, according to Professor Ariely. Fostering a sense of caring, appreciation, and meaningfulness in the workplace motivates employees more than external forms of compensation do, like money.

So should workplaces simply curb their investment in employee bonuses and reward employees with pizzas and thank you notes instead?

Not exactly. All employees in Ariely’s study returned to their baseline level of productivity after around a week. So while these rewards can help employees feel cared for at work, they don’t have a long-term impact. 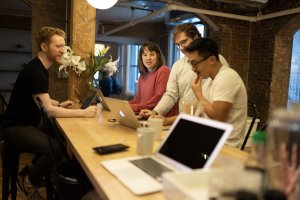 Building a culture of caring

What does it mean to create a culture of caring? It’s about leaders caring about employees, employees caring for each other, and everyone in the company caring about the company’s purpose, according to Harvard Business Review. And, it’s about how people treat others, and how they view the work that they’re doing.

But every person and company are different- there’s no one-size-fits-all formula when it comes to satisfaction, meaningfulness, and productivity.

Here are just a few ways companies can promote a culture of caring:

1. Caring starts at the top

Leaders who look out for those around them – and make it visible to everyone – play a big role in fostering a culture of caring.

When leaders are others-focused, and provide support to their team members with no strings attached, it encourages those around them to do the same, setting off a contagious giving reaction, organizational psychologist Adam Grant explained in his book, Givers and Takers.

Here are few effective ways leaders can give to their team members, without taking too much of their time:

1. Do other people small favors that take no more than five minutes – like making an introduction, giving feedback, and offering advice
2. Devote time each week to helping people out
3. Pick one or two ways of helping that you enjoy and excel at, rather than being a jack of all trades 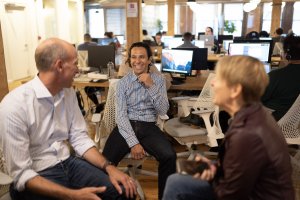 2. Create opportunities to make an impact

In a survey to Lemonade’s team of 278 people, 92 percent of them said that Lemonade’s Giveback program, where unclaimed premiums are donated to charity, impacts their happiness at Lemonade.

But an even higher percentage – 96 percent – of Team Lemonade members said that Lemonade’s business model, which is designed to bring out the best in people, contributes to their satisfaction at work. The business model is focused on building more trust, since Lemonade does not profit by not approving claims – unlike other insurance companies.

Creating a company vision, clearly communicating how employees’ work moves the needle, and sharing user success stories are just a few ways organizations can instill a sense of purpose and meaning.

Trust is the backbone of meaningful, dependable relationships, which fuel a caring work culture. How can companies foster trust amongst employees? By exhibiting radical transparency.

When leaders share behind-the-scenes company updates and plans with their team, it gives employees a greater stake in the company, and makes them feel valued.

Transparency is the #1 factor contributing to employee happiness, according to a study by Tiny Pulse, which reports a 94% correlation between happiness at work and a transparent company culture. (Here’s how Lemonade exhibits radical transparency.)

Companies should set aside cash bonuses, and invest in practices that make employees feel cared for. And a pizza party every once in a while wouldn’t hurt either.

This is When You’re Actually Most Productive

Feel like you’re not getting enough done? This simple hack will increase your efficiency and push your productivity to the next level.