How many times have you looked at your phone in the last hour? What about in the last 10 minutes? If you’re like most, the answer is probably more than a few.

For many of us, our phones have become an integral part of our day-to-day. In fact, US Chief Justice John Roberts Jr. stated that phones are such an “insistent part of daily life that a visitor from Mars might conclude they were an important feature of human anatomy.”

It’s no question that this phenomenon is widespread. In a recent study, 94% of participants reported feeling troubled when they didn’t have their phone with them, 80% felt jealous when someone else held their phone, and 70% expected to feel depressed, panicked, and helpless if their phone was lost or stolen, according to Psychology Today.

Another study even found that half of participants would rather have a broken bone than a broken phone, says NPR.

While these stats may not surprise you now (with the exception of that last one), they’d probably shock someone 6 years ago. It wasn’t until 2013 that the majority of Americans owned a smartphone.

To put it another way: in just 6 years, a single tech device has gone from obsolete to an object people would be willing to give up food, sleep, and sex for, according to USA Today.

How did we get from A to B?

Spoiler alert: A lot of it is rooted in psychology and evolution.

This sudden increase in phone usage didn’t happen overnight. It happened gradually, starting from a tiny molecule in our brains called dopamine.

Here’s what happened: When you got your first smartphone, you probably did some things that made you feel good. Think: reconnecting with a childhood bud, reading a nice text message from a friend, or getting a notification. All of these activities caused the release of dopamine.

What’s dopamine? It’s a neurotransmitter that makes you feel good. Our brains are designed to release dopamine when we do something that meets a survival need, like eating or having sex. Countless studies have shown that phone activity causes the release of dopamine in our brains, making us feel aroused, motivated, and happy.

But in those first few months of phone usage, you also probably did a few mundane things that didn’t give you any sort of warm, excited feeling, like mindlessly scrolling through oddly satisfying videos on Instagram or looking at pictures of a stranger. 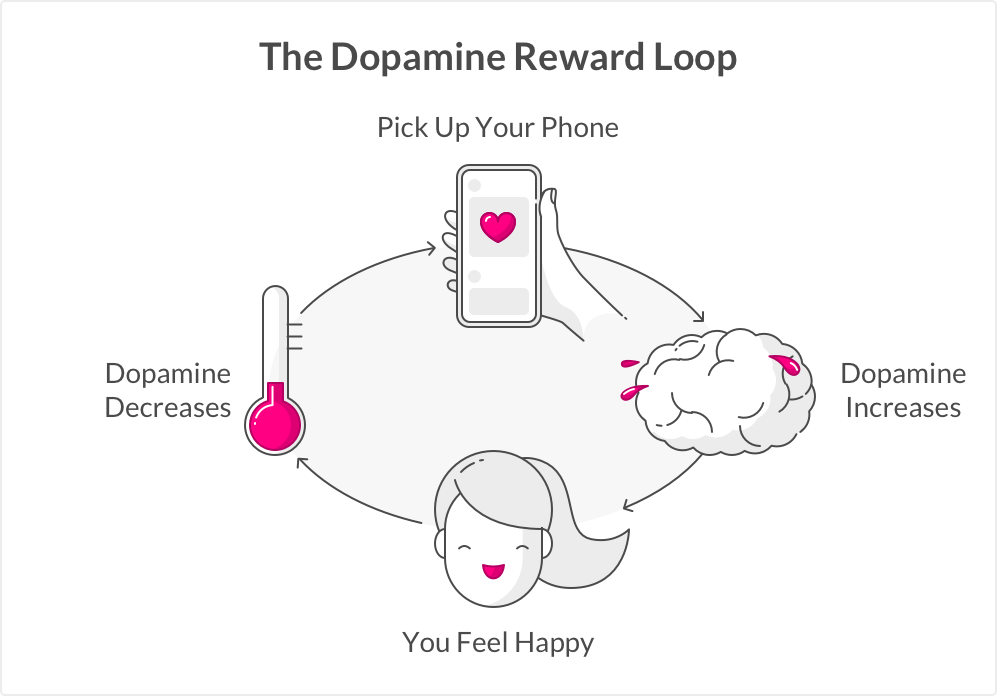 And suddenly, a habit forms

When you perform a specific behavior over and over again that triggers a certain reward, the pattern becomes etched into your neural pathways. Soon enough, your brain begins to crave that reward regularly.

And here’s the thing about dopamine: it quickly metabolizes in your brain, leaving you wanting more and more, as soon as possible. So once the impact of the dopamine goes away, your brain will do whatever it takes to get that feeling back, as soon as it can.

What’s an easy, accessible way to get that surge of dopamine? Picking up your phone. So that’s just what your brain tells your body to do.

The thing is, not every text, Facebook post, and Instagram picture will deliver the goods your brain is looking for. But we’re wired to work hard for these dopamine rewards, and will continue sifting through the mediocrity in the way to get there.

Sometimes, we’ll even contribute to the reward system ourselves.

Ever find yourself posting something on social media just to feel good? Or sending a bunch of texts to friends, just to feel connected? No worries – you’re not alone. It happens to the best of us, and it’s our neural systems at work.

What’s in a phone?

But why is this happening with phones, and not other devices? What is it about phones that bring us such a surge of dopamine?

Take tablets, for example. They’re sleek, digital, and somewhat portable, just like phones. But the difference between a phone and a tablet is that we tend to use tablets for more personal, passive activities, like watching videos and reading books. These activities prompt a totally different neurological response, according to Psychology Today.

However, we tend to use our phones for a different function. They serve as a portal to connect to our social world. We spend most of our time on cell phones texting, scrolling through social media, and messaging friends. 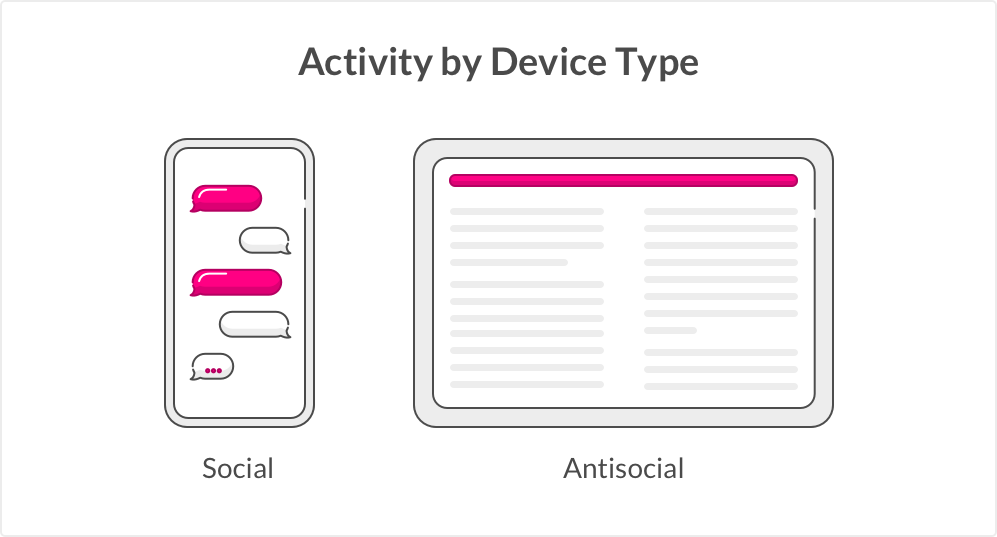 So what does this have to do with dopamine? Turns out, all notifications we get on our phones – from social media, messaging apps, and others – activate dopamine in our brains. In fact, the most addictive smartphone functions all share a common theme: they tap into the human desire to connect to other people, according to a new paper published in Frontiers in Psychology by Dr. Veissière and Professor Stendel.

Just like the release of dopamine, our need to be social is hardwired in our brains. Humans have a desire to seek and maintain strong relationships. It’s as basic to our psychological well-being as hunger and thirst are to our physical satisfaction.

Why? It’s rooted in evolution. As humans evolved, they depended on each other to survive under harsh environmental circumstances. Those who had stronger connections with other humans had a higher chance of surviving, because they had several people to support them.

Particularly, the desire to monitor other humans runs deep in our evolutionary past. As humans evolved, they needed constant input from others to determine culturally appropriate behavior. This was their way to achieve meaningfulness, long-term goals, and a sense of identity. It’s no wonder that social media – and particularly posting pictures – arose to such popularity.

All things considered, it looks like smartphones provide us with a platform to carry out our innate need for human connection, which is a “fundamental feature of human evolution that predates smartphones by hundreds of thousands of years,” according to Dr. Veissière.

Why can’t we stop picking up our phones? They deliver one of our most basic needs in a way that’s simple and instant: human connection.

This is especially appealing to humans, since our brains are hardwired to find shortcuts to everything to save cognitive energy for other pursuits.

And truth be told, this effect is only exacerbated by tech companies. Several tech companies hire psychologists, neuroscientists, and social science experts to help them create addictive products that keep the release of dopamine going. There’s even a startup called Dopamine Labs, which uses neuroscience to help tech companies make their products extra ‘sticky.’

Okay, so this can all seem a bit scary. But actually, it can be quite comforting.

Knowing the psychology behind why we do things can be the first step to stopping our harmful habits.

After all, since our smartphone usage is rooted in our evolutionary desires, they must be benefiting us in some way.

Dr. Keith Hampton of Michigan State University points out that smartphones enable us to stay connected to friends, even after transitioning from school to college or moving to a new city. Because of that, we can have a wider network of people to confide in, travel with, and learn from. “You’re gaining a more diverse social network,” he says.

But it’s also worth mentioning that our phones interfere with some of our most important relationships in face-to-face scenarios. According to a study conducted by James Roberts and Meredith David, ‘phubbing’ – snubbing others in favor of our phones – decreases marital satisfaction, in part because it leads to conflict over phone use.

Not only that, but another set of studies showed that just having a phone out (say, on the dinner table) and present during a meaningful conversation interferes with your sense of connection to the other person. And usually, it’s those meaningful, face-to-face conversations that truly bring us closer to each other.

In one of these studies, Professor Misra found that “if either participant placed a mobile device on the table, or held it in their hand, the quality of conversation was rated to be less fulfilling.” She also noticed that participants who took out their phone mid-convo felt less empathy for the other person.

So, are we screwed?

No, we’re not. While this article may feel like a grey cloud looming over your head, there are quite a few silver linings. Let’s first clear up that phone usage doesn’t create same neurological response as chronic addiction. There are typically no withdrawal symptoms associated with phone usage – rather, it’s a habit that a reset and cleanse can fix.

Meaning, we can still stay connected with our friends through our phones and maintain a healthy relationship with our phones at the same time.

How? Well, that’s the very point of this series. In our second article in this series, we give you a guide to developing a healthier relationship with your phone.

And we’ll leave you with this challenge: Download an app that tracks your phone usage, such as Moment, and start paying attention to how many times you pick up your phone each day. It might just surprise you. And if you start to work towards decreasing that number by just 10 or 20 a day, the benefits may just surprise you too.

Let’s face it: we all have that one bad habit we just can’t shake. Here’s how to scientifically put an end to your bad habits once and for all.

Incumbents find the idea of a 560% price gap unsettling. Understandably. I get it. That’s why I’m writing this post.