Let’s say your phone’s stolen (ouch), and you have to make a claim with your insurance company. Cue the inevitable sense of dread.

If your insurer approves your claim, that $$ usually comes directly from their profits. And if they deny your claim, they keep that money for themselves.

So how many claims reps are itching to approve your claim? Not many.

This isn’t because they’re bad people – it’s just how insurance works. Most insurers want to deny claims in the interest of profit, though their customers want their claims to be approved.

This conflict of interest makes insurance one of the least trustworthy industries out there: Only about 10% of people trust insurance companies. (Insurance Business Mag)

But if you look at the science, this stat isn’t surprising. People are less likely to trust – or even like – those who take from them without giving anything in return. Organizational psychologist Adam Grant calls these people ‘takers.’

Grant says that since most people behave as ‘matchers’ – aka, they treat others how others treat them – the majority will seek revenge on takers, and hope for their downfall.

So the question is: How can we create more trust between insurance companies and their customers, and dissolve this conflict of interest?

With such a conflicted business model, it’s no surprise insurance customers are some of the most badly-behaved out there.

Reminder: It’s not because they’re takers. As mentioned, most people are matchers, and behave based on how they’re treated by others.

Consider this: A survey conducted by Accenture found that 1 in 4 people say it’s okay to defraud an insurance company – and that’s just the percentage of people who admit it’s okay!

“Consumers often accept soft fraud as a fact of life, and in some cases view such insurance system abuse as an entitlement to balance out perceived inequalities in the insurance system.” (Contingencies Magazine)

‘Balance out perceived inequalities?’ Sounds something like tit-for-tat. Consumers don’t trust insurance companies, expect dishonesty, and respond with dishonest behavior in the form of fraud. 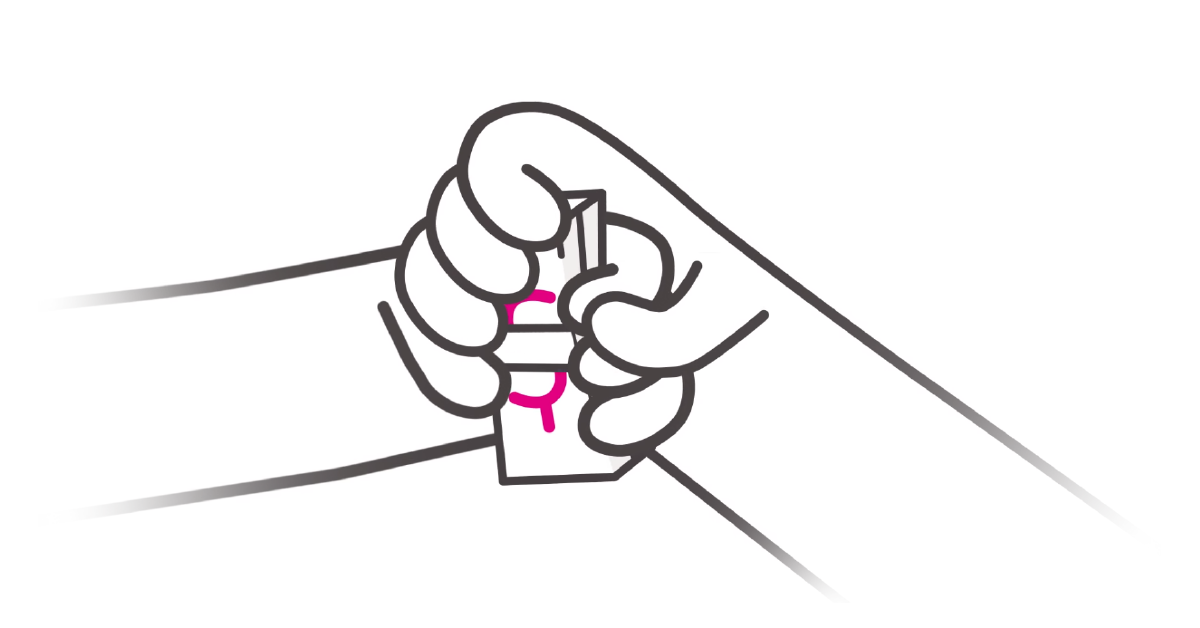 Therefore, fraud is the result of matching – seeking revenge when anticipating bad behavior.

Talk about a vicious cycle: Insurance companies increase premiums as a result of consumers’ distrust, leading to even more distrust between insurers and their customers. Matchers continue to match dishonesty with dishonesty. When will it stop?

While this highlights some of the worst consequences of matching behavior and conflicts of interest, there’s a third type of person who can alleviate this cycle: ‘givers.’ Givers tend to provide support to others with no strings attached.

Here’s how it works:

Givers create a norm of helping and collaborating, and matchers catch on to that norm. When giving behavior is consistent and visible, it becomes contagious.

That gives us hope – matchers’ tendency towards reciprocity can be leveraged for good. So is it possible to leverage matchers’ urge for reciprocity to improve trust within the insurance industry?

We know this much: Something pretty unusual has happened in an industry fraught with distrust and misbehavior: Several Lemonade policyholders have approached us asking to return the money they had received from a claim payout, because they no longer needed it.

In an industry where we see customers taking money from insurance companies, seeing people giving money back was pretty surprising. Talk about a 180.

When we asked one of our policyholders, Alan, why he returned the money, he responded, “didn’t think much of it… it was the right thing to do.”

In other words, Alan saw his act of giving as an obvious natural reaction, the opposite view from most people who see taking from insurance companies as an inherent ‘fact of life.’

So why did our Lemonaders commit such unusual behavior?

Maybe it’s because Lemonade’s business model eliminates matchers’ instinct to seek revenge, and makes for more trustworthy insurance. By paying a flat fee, and having the remainder of the premium geared towards claims, policyholders’ interests are no longer in conflict with their insurer. Bye bye conflict of interest.

They don’t anticipate dishonesty, and feel no need to be dishonest with us. Tit-for-tat.

But something else is also at play here. It’s not just that these policyholders didn’t seek revenge – they went out of their way to act generously. They gave back money to an insurance company without expecting any sort of reward.

These Lemonaders must have sensed a norm of giving, perhaps because of Lemonade’s Giveback. Lemonade gives unclaimed money to charity, and policyholders have taken notice: 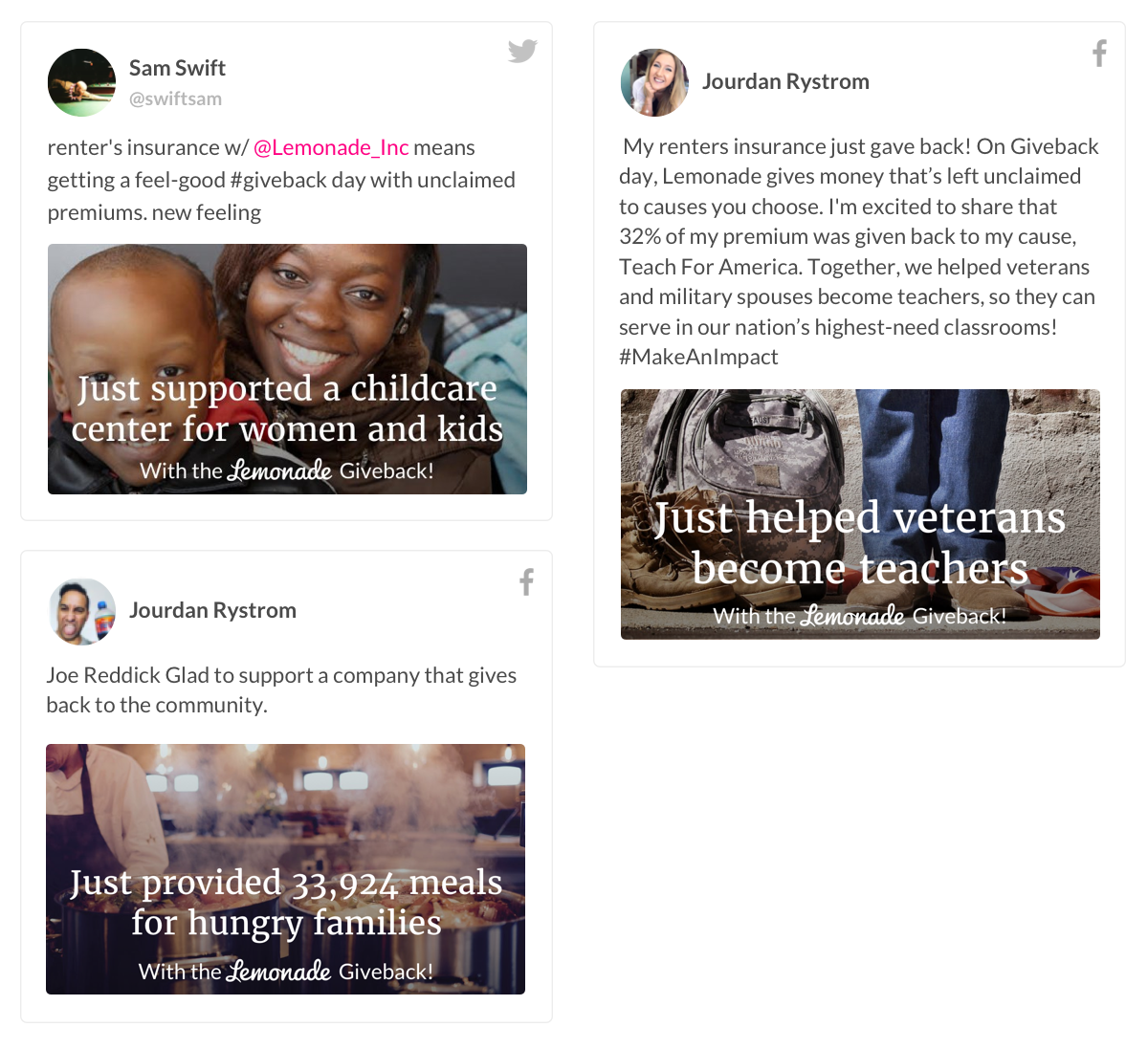 According to Professor Grant:

“Generous treatment often brings on the emotion of ‘elevation,’ … a warm sensation people feel in their chest. The effect is that giving becomes contagious; people want to be more like them – following this lead, spreading the norm, modeling this behavior.” (Fast Company)

So what we’re seeing here is matchers matching the norm set by their insurance company. Yet this time, the norm was different.

By dissolving the conflict of interest between the insurance company and the insured, and giving unclaimed money back to charity, Lemonade inspired a completely new type of behavior amongst our policyholders. One that even our insurance team members had rarely seen before in their decades working for traditional insurance companies.

So what have we learned? For one, matchers have some pretty strong instincts. Get on their bad side, and they’ll have no problem seeking revenge. But set a norm of giving, and they’ll copy that generous behavior, and pay it forward to other people.

Step by step, giving will inspire other people – and even other industries – to improve their relationships, themselves, and the people around them.

The Honest Truth About Dishonesty

For the first time in ages someone is setting out to design an insurance experience with the aim of bringing out the very best in people. Dan Ariely is taking on insurance, and the industry may never be the same again.