One of the most enjoyable parts of the launch of Lemonade’s brand-new pet health insurance has been seeing all the quirky and creative names that pet parents give their furry friends. For every plainly named dog or cat, there’s one who has been christened in honor of a 1980s celebrity or a French philosopher.

In general, we’ve noticed that cat names tend to be a bit zanier than dog names. While we can’t prove it, we suspect it’s because dog owners have to introduce their pets to strangers more often—and maybe it’s a little embarrassing to say “This is my beagle, Sir Yodel Quack McScruff IV.” One additional surprise from our unscientific survey thus far: Luna leads the pack as one of the most popular names for Lemonade dogs and cats. Who knew?

Below, we asked pet parents to shed a little light on some of our favorite names. And don’t forget to check out Lemonade’s pet health insurance! It’s a vital safety net for all cats and dogs, whether they’re named Bill, Susan, or Tyrannosaurus Barksalot. 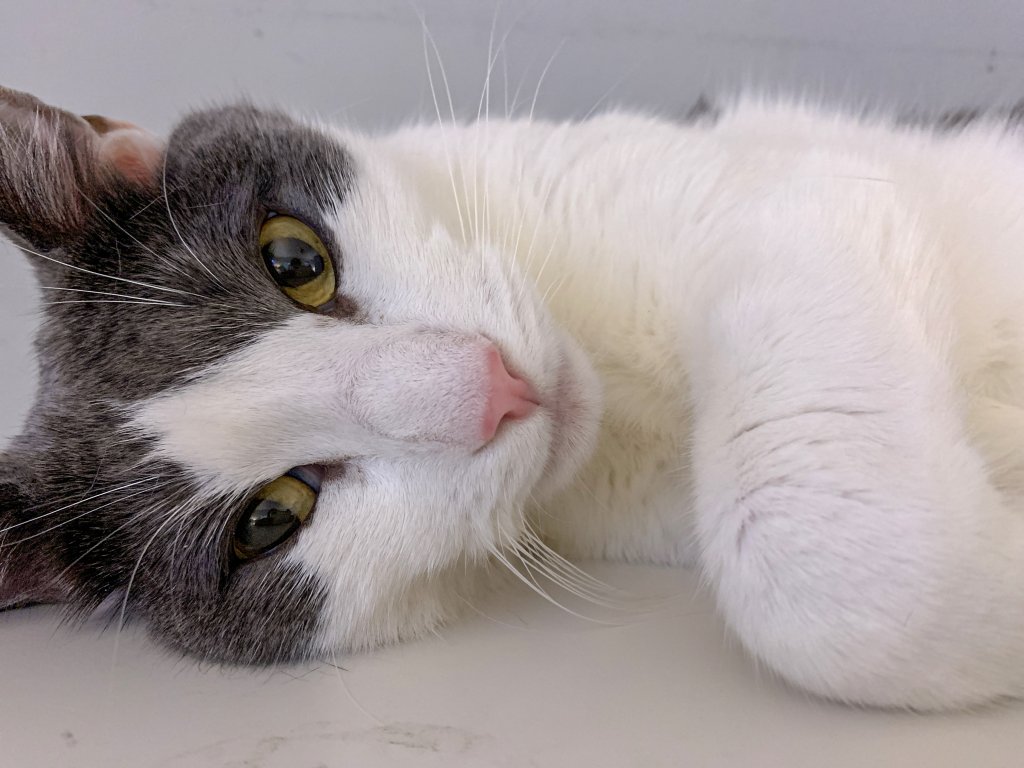 Kenn R. dubbed his cat in honor of the “irascible” Jean Baudrillard, author of famously mind-boggling texts like Simulacra and Simulation. “Why? Because he’s my favorite late 20th-century French philosopher,” explains Kenn. “I’ve never heard of a cat named after him. They’re both too smart for their own good, and they both drive me crazy. I love them both dearly.”

“Pythagoras was named after the ancient mathematician and philosopher notable for his famous equation dealing with right triangles, the Pythagorean Theorem. He also taught that the earth and all heavenly objects were spheres, which he observed during lunar eclipses,” explains this brainy cat’s mom, Angela B. “My husband James and I got married in the path of totality during the Total Solar Eclipse of 2017 when the Moon passed between the Earth and Sun. Astronomy and science are our shared passion and it was only natural to carry that on to the naming of our best cat, Pythagoras. Ancient Pythagoras was the first to dub himself a ‘lover of wisdom,’ which we see reflected in Pythagoras’s thoughtfulness and curiosity every day.”

“Baba Yaga was a Russian street dog before she was rescued and sent to the United States,” says Amalia V. “We actually picked her up directly from the airport! We knew we wanted to honor her Russian roots, so we chose Baba Yaga as a tongue-in-cheek reference both to the witch from Russian folklore and one of our favorite movie franchises, John Wick.”

Vivian W. adopted her lovable bulldog/Blue Heeler/Jack Russell mix at the age of three weeks. “Ecclesiastes means ‘preacher,” she explains. “Since I’m in school to become a pastor, I thought it made sense to have a preacher by my side.”

This two-year-old cat gets his name from “the smartest character in Marvel Comics, Princess Shuri of Wakanda,” explains her mom, MM. “We chose Tourmaline because black tourmaline is a gemstone known for its protection and healing properties. When we adopted him, we were emerging from a period of deep grief after losing our pit bull to a malignant mammary tumor. Not only were we grieving, but our other cat Nori Shakur was as well. Shuri has been such a grounding presence in our home.”

Alyssa R. and Ryan O. adopted Snork when she was three years old, and kept her original name. “Before we brought her home, we were scratching our heads trying to figure out how such an elegant dog got a name like Snork,” Alyssa says. “It didn’t take long for us to find out. She gets so excited at meal time that she makes a silly noise that sounds like ‘snork’ whenever she starts to eat! As a fellow food enthusiast, how could I blame her?” 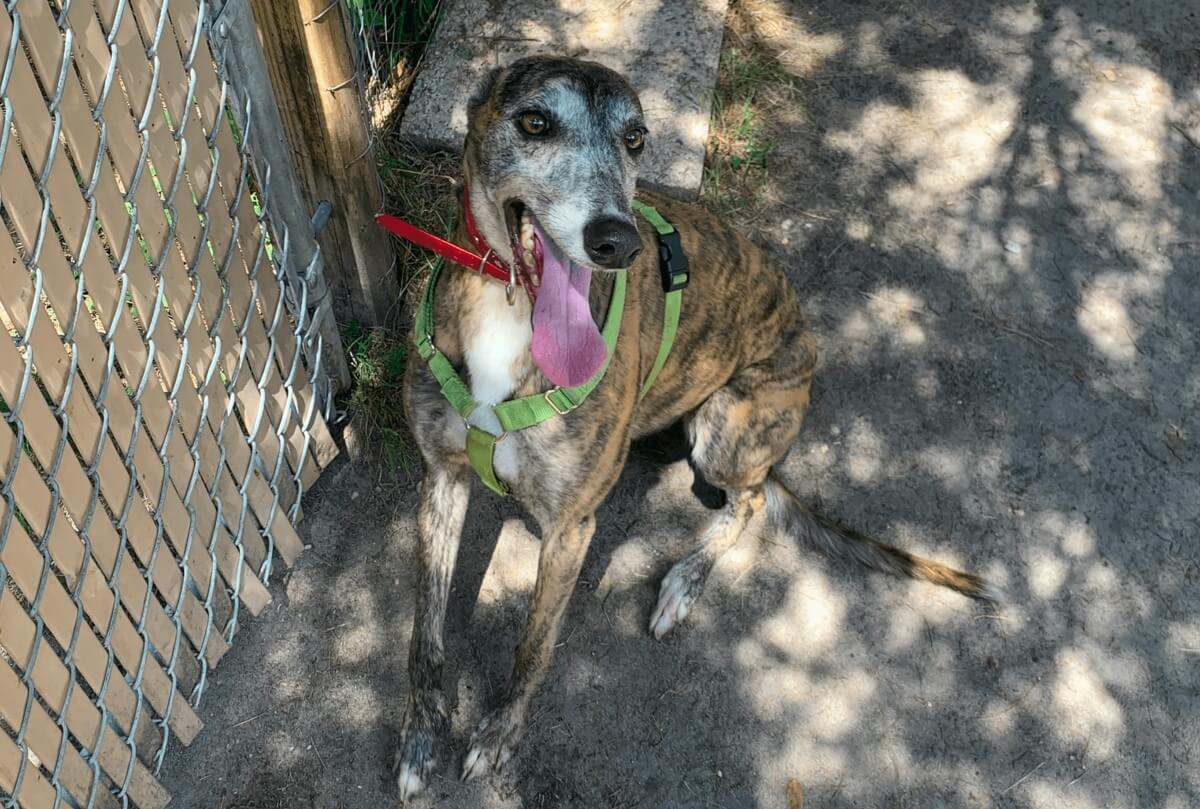 Snork, waiting for the next meal.

Emma L.—who shares pet-parenting duties of this 6-year-old Maine Coon mix with her boyfriend, Josh—describes The Beebs as a celebrity and a queen. (Indeed, this kitty has starred in not one but two commercial spots for Royal Canin pet food.) “The Beebs actually started out with an entirely different name—she was named after some hockey player? Idk. She doesn’t like to talk about it. Her true name came to us like a spirit messenger, gently calling ‘The Beebs’ on the wind… and so it was. You can drop the ‘The’ if you’re friends, but that takes some time (and treats).” 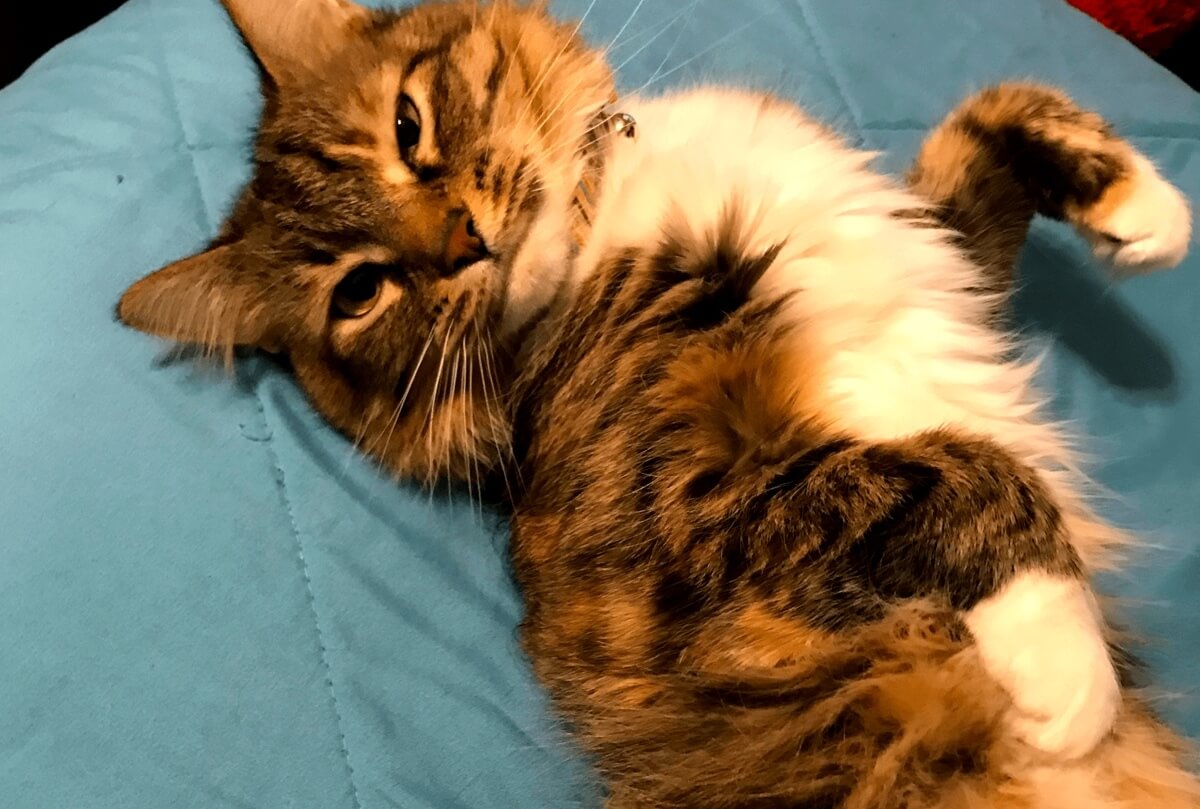 The Beebs knows the camera loves her.

Karen G. gave her 2-year-old chihuahua a royal name, despite her humble beginnings. “I found Snickers in a downtown L.A. McDonald’s parking lot,” she says. “Someone abandoned her when she was only 5 weeks old. Snickers’s mohawk hair-style is natural… everyone loves to style her hair.”

Karen’s 5-year-old Husky, Rocket, might have a less unusual name, but its pedigree is equally dramatic. “Rocket is the fastest dog at all the dog parks,” she explains. “He takes after his owner, my partner—World Champion Gold Medalist X-Games professional racer Bob Pereyra…the Godfather of Street Luge.”

“Smushy’s predecessor, Sugar von Wiesel, died of PIV at 10 months old,” recalls Kevin R. “A baby gone way too soon….it was devastating.” While Kevin still mourned that loss, he realized that there were plenty of cats-in-need out there. “I thought I should give a kitty a loving home, and wanted to honor Sugar. Therefore, I came up with ‘Smushy’ and honored his ‘von Wiesel’ predecessor: Smushy von Wiesel II! Side note: Smushy is toilet-trained, [and can] sit—and high five.” 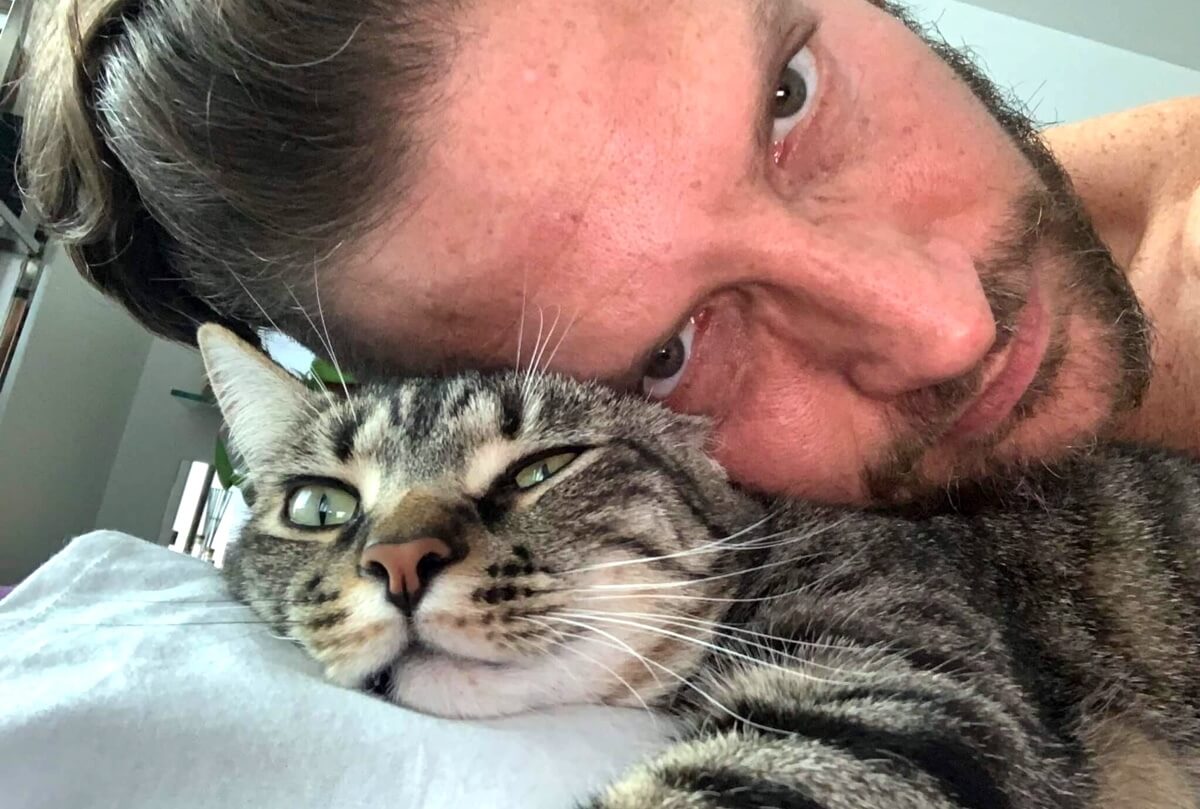 “When I first met Loup at the shelter as a kitten, he had a short, fluffy, black coat with white guard hairs, reminiscent of a wolf’s coat,” says Megan M. “Werewolves are my favorite monsters so I named him the French words for a werewolf: loup garou. He’s now glow-ed up into a handsome (and hammy) young man!”

Amanda E. wanted her Shaded English Cream miniature long-haired dachshund to have a name that reflected his German heritage. “Fritz was a perfect fit for my little low-rider, who doesn’t walk—but prances,” she says. “When I met Fritz on his eight-week birthday, it became clear he was a man of sophistication, luxury, and class. The name ‘Fritz’ alone simply would not do. Thus, Carlton was added. Fritz Carlton, a five-diamond dog deserves a five-diamond name.” 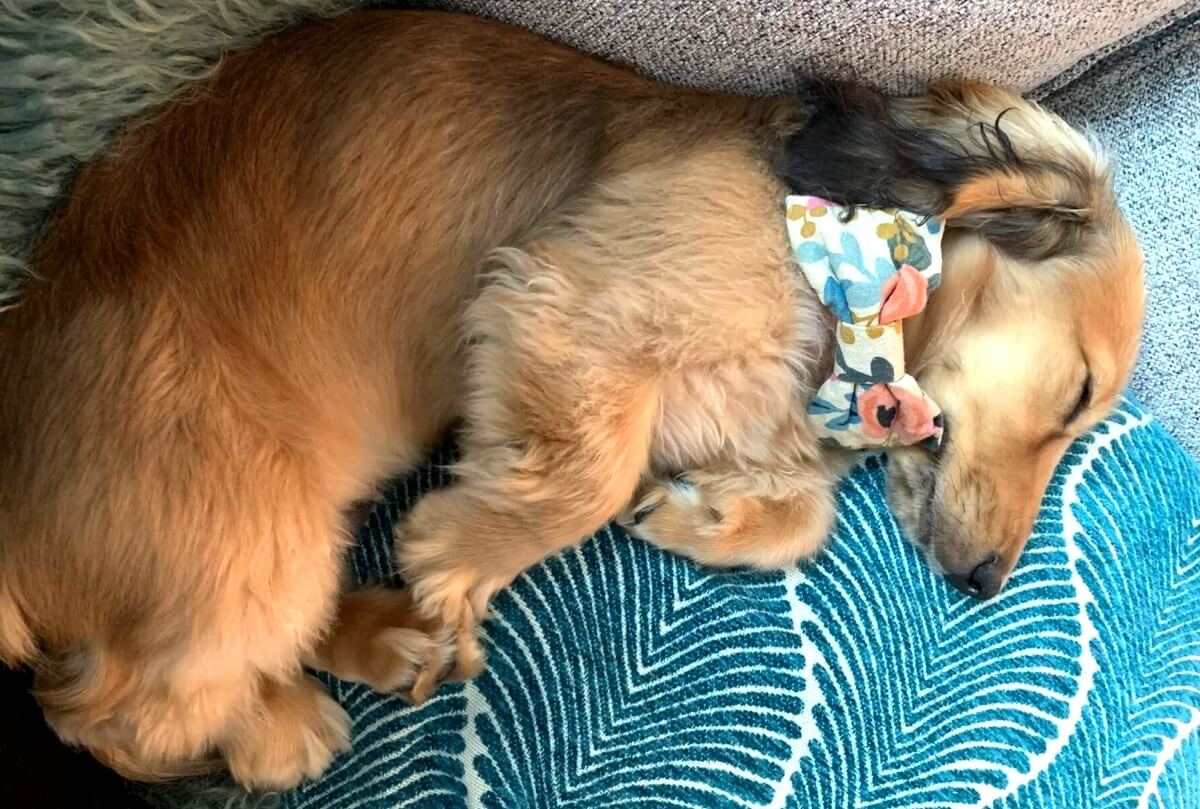 “My six-year-old Bengal cat is named God, and as much as I’d love to say that was my doing, I’m afraid it came with him when I inherited him from an old roommate,” explains Rustin L. “His one request was that I didn’t rename him. Full disclosure: I totally would have. I wanted to call him Schrödinger. I’m glad I didn’t get the opportunity though. My guy definitely views himself as more of a deity than a physicist.”

Mae F., mom to this adorable French Bulldog, was eager to give him a name that was “reminiscent of upscale British characters.” Why? “He was a little gentleman from the day I brought him home, so it really suited him,” she explains. “I also wanted to be able to shorten his name to fit when he is being clumsy or troublesome. Mostly he’s a gentleman: Thatcher. Sometimes he’s falling backwards off the couch, running into the fence, or chewing on my suitcase—that’s Thatch.” 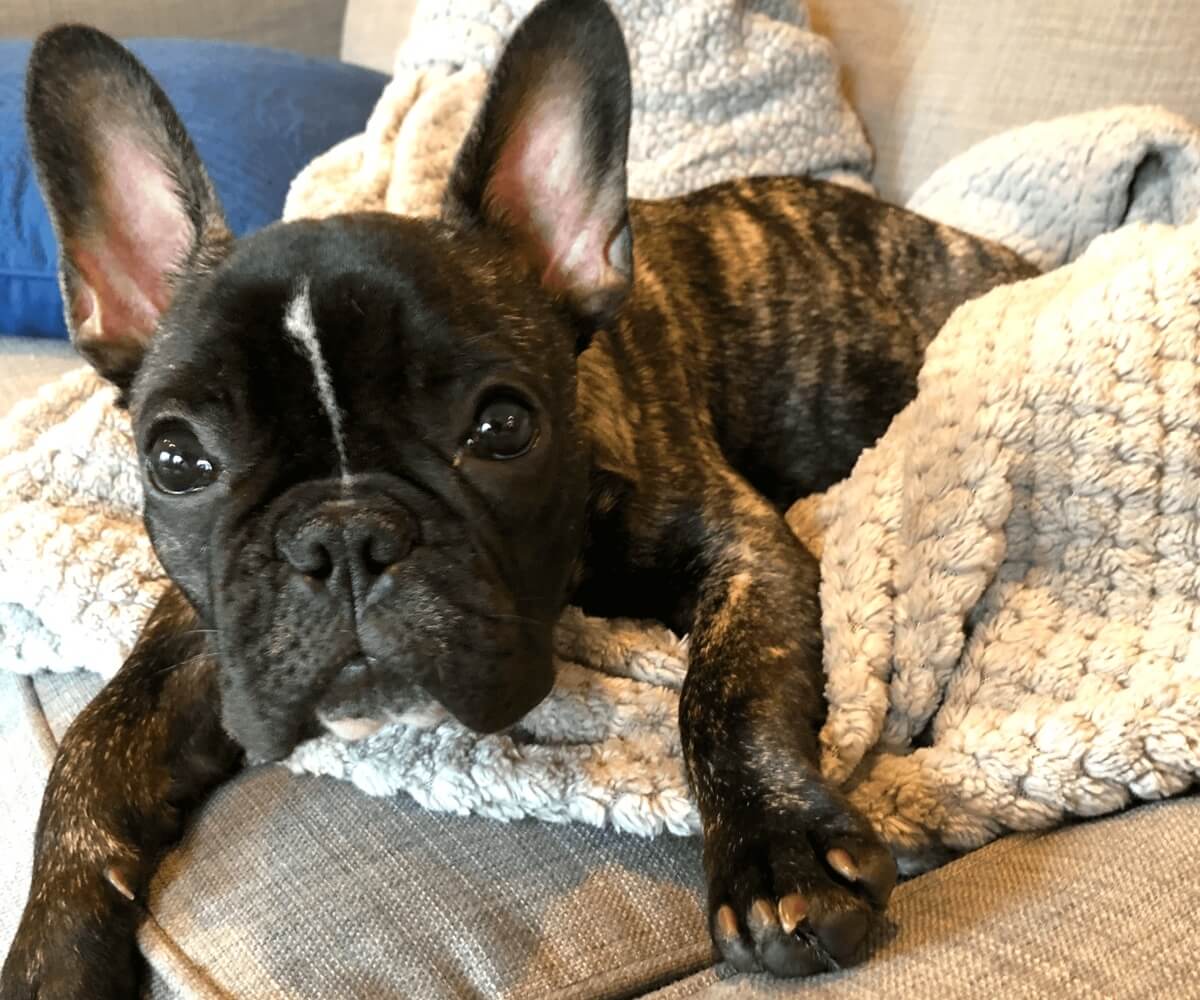 Thatcher is a proper gentleman.

Your Ultimate Guide To How Pet Insurance Works

You can expect your pet insurance to cover costs for a range of troubling things we hope your pet never experiences. Here are some examples.

What Does Pet Health Insurance Cover?

Before purchasing pet health insurance, you should know what your furry friend’s policy will actually cover—and what it won’t.

What Does Pet Health Insurance Not Cover?

Whether you have a Texan pup or a Lone Star Cat, it’s important to get them covered with pet insurance.

How Much Does Pet Insurance Cost?

Let’s cut through the complicated small print, and figure out once and for all how much pet insurance actually costs