In late 2016 we were nervous as hell. We were about to launch a challenge to a $3 trillion industry, and it was anyone’s guess how we’d be received.

Within 48 hours, feedback from users and influencers allayed our worst fears. 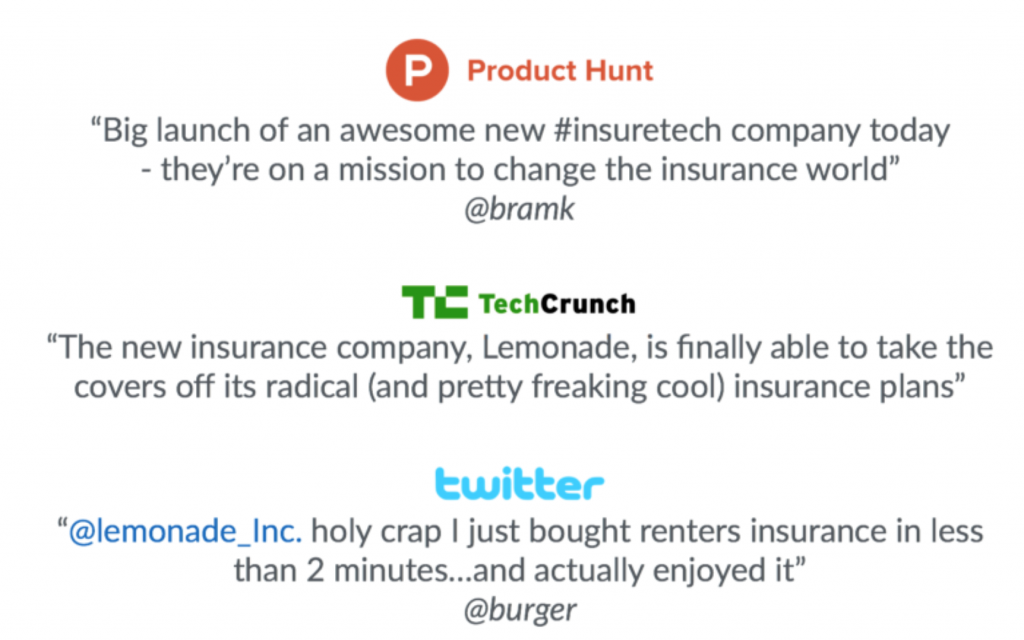 But as the hours turned to days, and days to weeks, questions remained. A full year’s worth of data now offers some answers, and what follows are the highlights, and lowlights, of 2017.

1. “Nobody will trust a company called ‘Lemonade’!”

A major early question was whether a newborn company, with a juvenile name, could engender the necessary trust for insurance. Everything was riding on our contrarian theory: that Lemonade’s newness and uniqueness would make it more trustworthy, not less.

You see, traditional insurers often equate trustworthiness with financial strength, which they project by erecting monumental buildings that dominate the skyline. 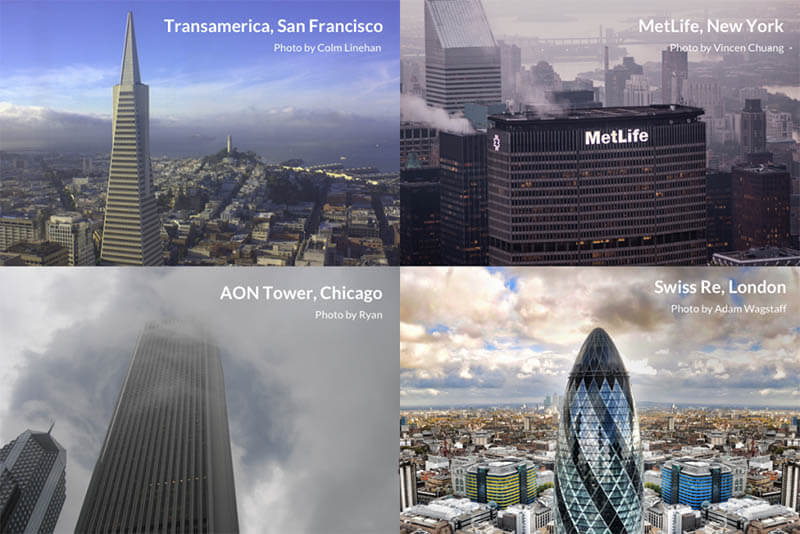 Skyscrapers weren’t within our budget, but in any event we believed such extravagance sends the wrong signal. People worry their insurer lacks the will to pay, not the means.  So we established Lemonade as a Public Benefit Corporation, with a view to signaling something very different. We hoped today’s consumers would find our approach refreshing and trustworthy.

The data suggest that they have.

Since Jan 1 2017, Lemonade insured over 100,000 homes, with our members entrusting us to insure them against over $15 billion of losses.

Our total sales for 2017 topped $10 million, with ~5% of our sales materializing in the first quarter, and over 50% in the fourth. This means our sales are on a strong and exponential growth curve. 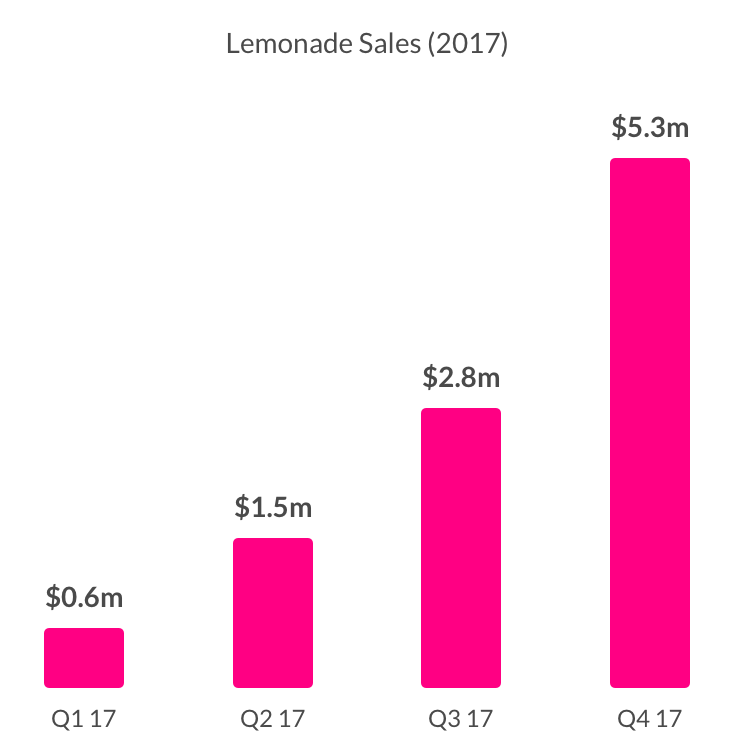 On launch day, we thought of our team as pioneers and true believers. But after our first year, we know it is our community of over 100 thousand who deserve those accolades. It is they who entrusted billions to a brand new insurer, and it is that trust that is powering the change.

Which brings us to the second thing we now know. We know our customers.

2. “Being the cheapest attracts customers — but the wrong customer”

The boogeyman in insurance is called ‘adverse selection.’ As an insurer, you set your price based on what a customer should cost you on average. But if instead of attracting average customers, you attract the kind that switch frequently, or claim excessively, you’re selling at a loss, and your days are numbered. It’s a particular threat to price-leaders.

And we were determined to be a price-leader.

But while we architected our business for value, we also architected it for values – and it was important to us that our customers appreciate both. Value alone selects adversely, but values select advantageously.

We breathed a sigh of relief when customers tweeted about Lemonade’s low-prices a lot, but about its B-Corp and Giveback even more. It was an encouraging early data point. 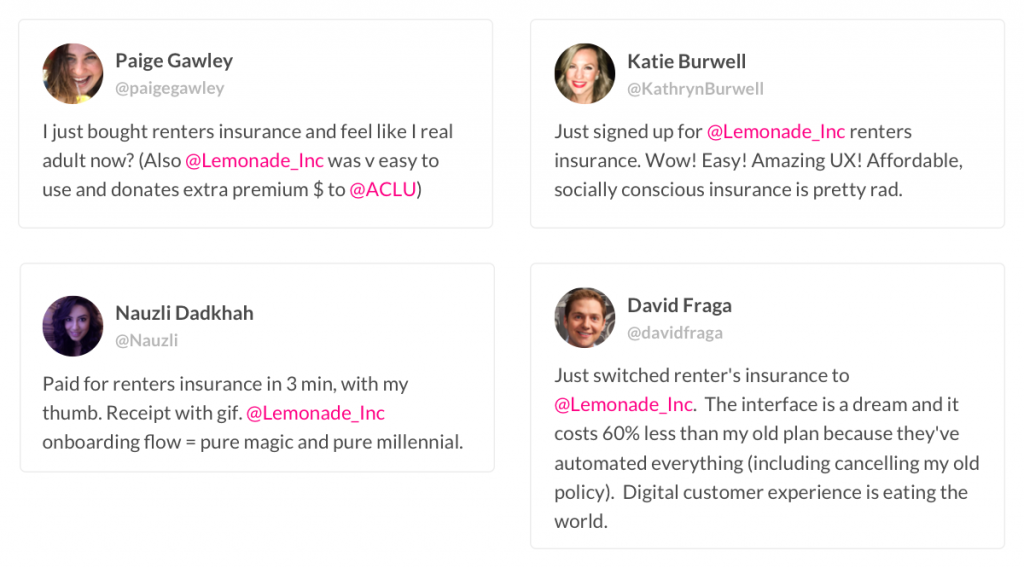 As more data came in during the course of the year, our assessment of the ‘adverse selection’ threat became more rigorous. See, throughout the many decades, the insurance industry has learned people’s education and job are highly predictive of what kind of risk they represent. If Lemonade’s customers were ‘below average’ by these measures, we’d have a problem, no matter what our Twitter feed said.

Good news: they are not.

The stats on Lemonade customers (who, by the way, are 50:50 male and female) suggest our members are more than 100% over-indexed for both graduate degrees and really high paying jobs. All this notwithstanding the fact that 75% of our members are under the age of 35!

The upshot: Lemonade is attracting the next generation of outstanding insurance customers.

3. “Making claims easy will lead to a flood of claims”

It’s an open secret in the insurance industry that a painful claims process discourages claims. There’s only so many times you can hear that ‘your call is important to us and will be answered in the order in which it was received,’ before you say ‘to hell with it’ and give up on your claim.

Instant claims? That could unleash a torrent of frivolous claims.

Truth be told, things were hairy for a while. Early in 2017 a couple of large claims arrived in rapid succession. We only had a few customers at that time, and as a proportion of our revenue (known as a ‘loss ratio’) these few claims were daunting.

Statistics taught us to expect this kind of ‘lumpiness’ in the early days, but we still slept fitfully until our business grew and our loss ratio began to normalize. We were in a much healthier place by year’s end (we report our 2017 loss ratio to regulators next month), and the frequency of claims is in line with our modeling. 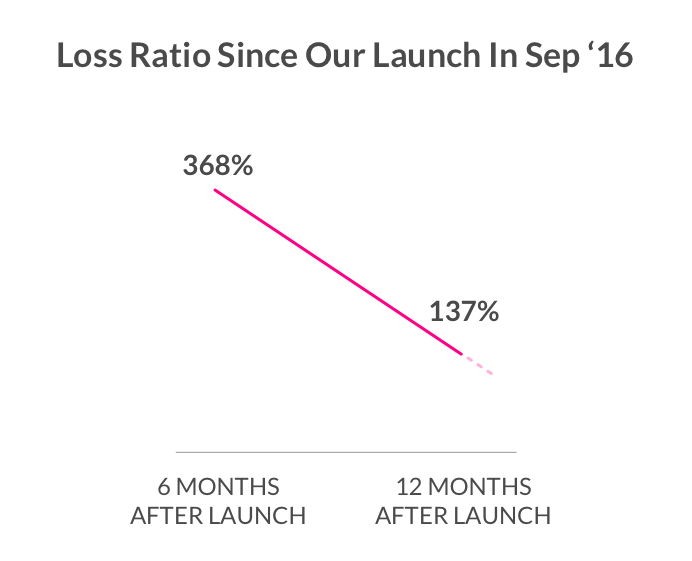 Beyond the ‘noisiness’ that is a byproduct of small numbers, our system seemed to have improved as we fed it more data. For example, our loss ratio among policies sold in 2016 is more than 2X that of policies sold in 2017.  This suggests that our underwriting was pretty shoddy in our early days. Definitely a lowlight.

Since then, we’ve taught our systems to be far more careful when underwriting policies, and our bot Maya declined to quote over $17 million worth of business in 2017. This has markedly improved the underlying health of our business –  but there’s still a way to go. Early mistakes will continue to drag down our reported loss ratio for awhile.

Our knight in shining armor? Well that’d have to be our claims bot, Jim. When we first announced his ability to review, approve, and pay a claim in seconds, we surprised a few. Happy to report that during 2017 AI Jim grew his capacity to pay claims 40X: 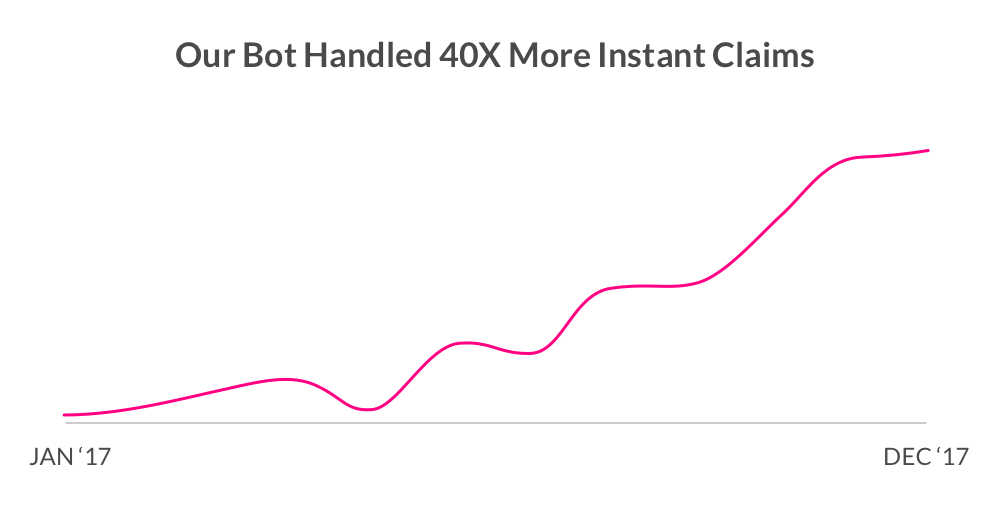 Our algorithms are getting better at flagging attempts at fraud, and we reported several of these to the authorities. Yet overall, the data shows that honesty is rampant among our members, and what behavioral economists dub ‘reciprocity’ is alive and well: about 5% of our customers contact us, after their claim is paid, to say their stuff turned up and they want to return the money. Our team has centuries of combined experience in insurance: this was a first for them all! 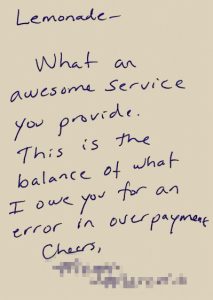 A quick look at the instant claims suggests our members spend a lot of time on phones and bikes. But this year had all kinds of losses: big ones like fires and smaller ones like stolen headphones. 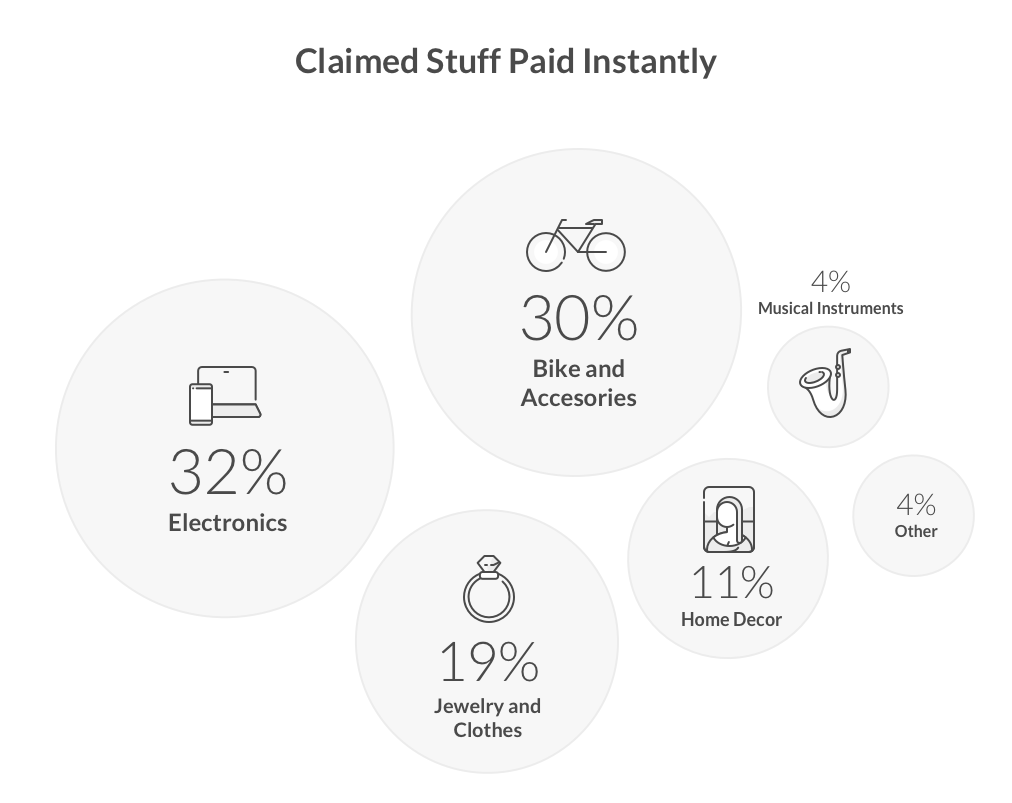 We are proud to say that we were (and are!) there for our community in times of need. 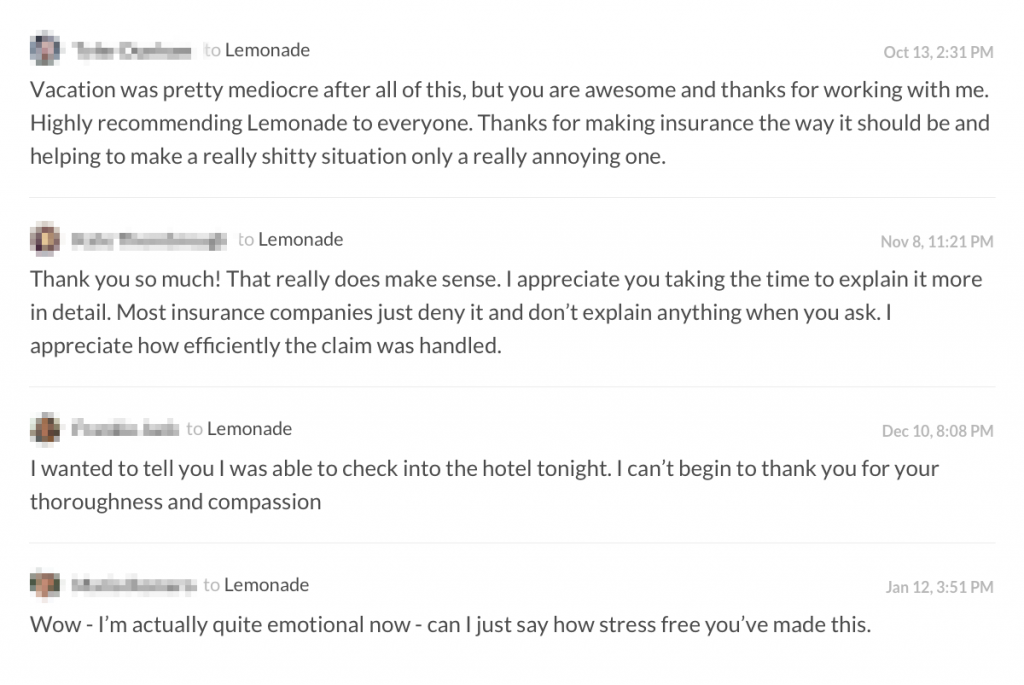 Stopping to smell the roses

2017 wasn’t all roses. We saw shockingly high loss ratios in the first half of the year, some vicious responses to our stand on guns, and knock off attempts by some of the Goliaths of the industry.

At the same time, we saw tremendous adoption by our customers, exciting advances in our tech, licenses from 25 states, and a Giveback that amounted to 10% of our revenues.

We’re extremely grateful to our team, our customers, and our regulators for making 2017 all that it could be. No doubt 2018 won’t be all roses either, but we will stop to smell them whenever we can 🙂

What we’re about to do here doesn’t come easy. But I’ll do it anyway: here are some of the most interesting stats we gathered during our first 48 hours on air!

Today, in Part 2 our 2016 Transparency Chronicles, I’m sharing interesting metrics from our first quarter in market— Q4 of 2016.

With Thanksgiving ‘round the corner, it’s time to reflect on how our milestones have been received, reveal our latest metrics and stats, and share what we, Team Lemonade, are thankful for.