Here’s some conflicting data: The photos that rank for ‘#funnypets’ on Instagram include a heavy mix of dogs and cats, with a sprinkle of birds, and the occasional ferret. And yet, fish rank second for sense of humor in pets, according to Richard Wiseman, a Professor of the Public Understanding of Psychology at the University of Hertfordshire.

How does one measure a fish’s sense of humor? Professor Wiseman’s study may leave us as confused as the Instagram algorithm does, but several studies draw conclusions about pets and their owners from ‘interesting’ data.

Is there anything to this beyond quirky clickbait?

In Professor Wiseman’s study, he used a survey to determine whether or not he could prove that pets have a unique personality. The study provided a conclusion about pet parents, too:

Know an emotionally insensitive cat owner? When it comes to statistics about our pets’ personalities, how much can we really learn? You can really claim anything if you have the right data sets. Whether you’re on board with fish personality analysis or not, here’s a breakdown of the top pet stats that will leave you scratching your head.

Dog ownership predicts voting behavior, and it’s red, according to Professor Stanley Coren, a researcher at the University of British Columbia. He found that the states won by the Republican nominee in the last four presidential elections had the highest rate of dog owners. 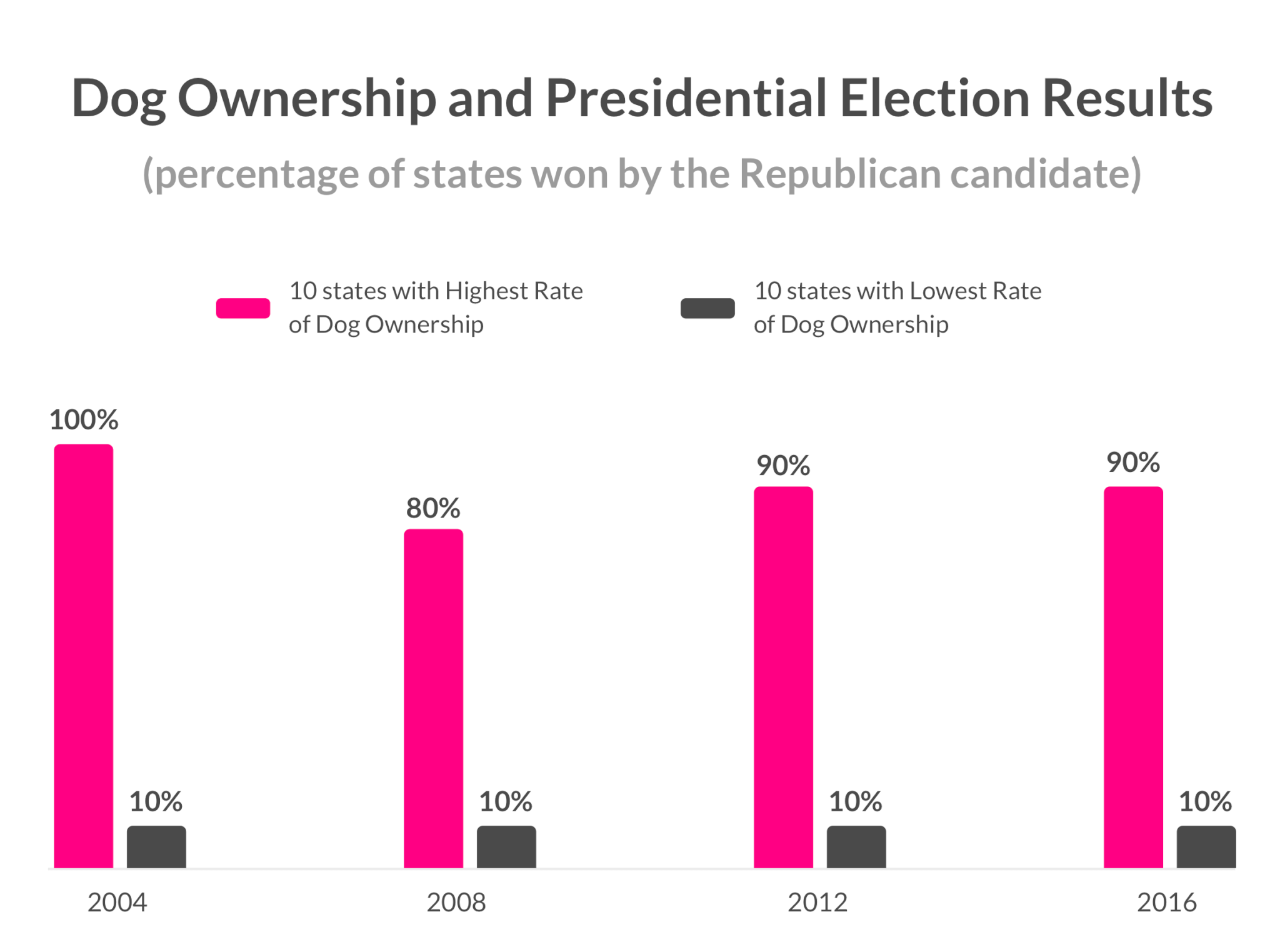 Wondering how he determines all dog owners vote, or how his data implies states that go red have 100 percent Republican voters? Us, too.

This could be considered a ‘lurking variable,’ where a relationship between Republicans (X) and dog owners (Y) falsely identifies that X causes Y, but Z is actually what’s causing X and Y. Coren says that Z could be social dominance, but is reluctant to make any conclusions about personality types.

He suggests, “from a statistical standpoint, these results are strongly significant” – but we’re not surprised these claims haven’t shown up in any peer-reviewed journals. So if you and your pooch are Bernie Bros, you can relax and get back to refreshing FiveThirtyEight.com.

Cat ladies are not more likely to suffer from psychosis

This study used a female audience, but researchers weren’t actually analyzing if you have a higher chance of losing your mind while cat-parenting as a female. A study published in the Psychological Medicine Journal examines a claim that toxoplasmosis, a disease that can be contracted from cleaning cat litter, can lead to schizophrenia.

In addition to risks of psychosis, toxoplasmosis has also been linked to a higher rate of miscarriages in pregnant women, which is why the study features a female population.

The study, which examined women who lived with a cat in utero, childhood, and adolescence, found no correlation to a higher rate of psychotic experiences among individuals exposed to cats. Great news for Taylor Swift.

Fish have a better sense of humor than cats

People rated their pets’ sense of humor as part of Professor Wiseman’s extensive study on pet personality at the University of Hertfordshire, and apparently, Ellen Degeneres is not the OG of funny fish. 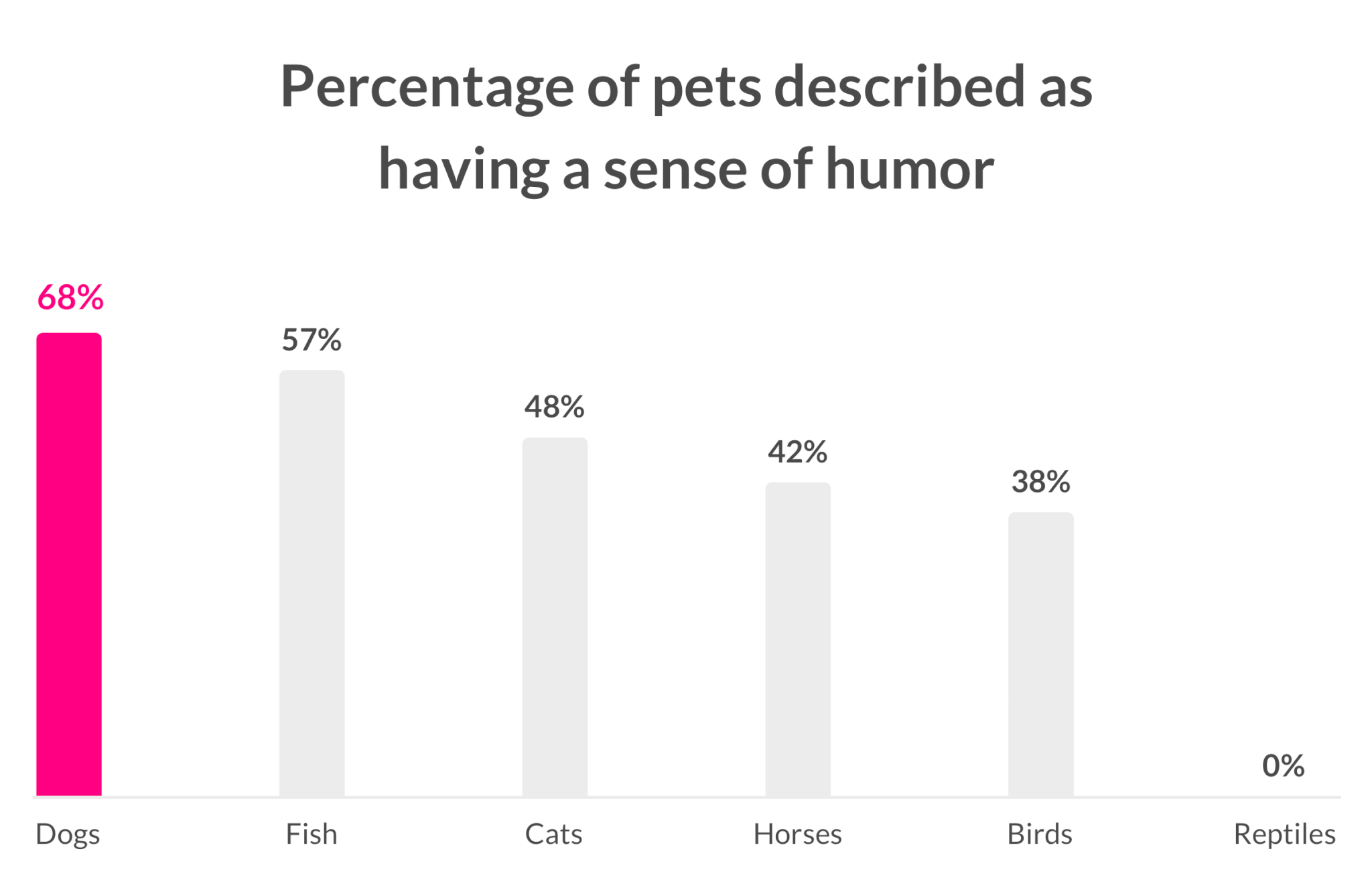 More than 2,000 respondents revealed they believe their pets have unique personalities, and that they share traits with them. Wiseman explains:

“Part of it is that people choose animals that reflect their own personality from the start. If you’re playful, owning a dog is going to be more up your street than having a cat. However, there might be more to it than that. There’s evidence that over time personality is contagious. If you live with a neurotic person for 20 years, you’re likely to become neurotic yourself. The same might apply to pet owners and their pets.”

So if funny cat videos are your thing, your cat is more likely to be in on a joke with you than she’d be with a less funny owner. And if you’re a reptile owner, you probably don’t care that your lizard’s not hilarious.

Believe it or not, this article is another whammy from Professor Coren, of dog-owners-are-more-likely-to-vote-Republican fame.

He’d heard a commercial photographer’s lecture, ‘How to Make Photographs of Women More Attractive and Appealing,’ which suggested a woman was more attractive when she held a cat. He was struck by how this conflicted with a conversation he’d once had with a model who owned four Afghan Hounds (selected to color coordinate with the majority of her wardrobe).

Inspired, Coren set out to gather data to prove whether a woman is more likely to make herself attractive by posing with a cat or a dog.

Coren built the parameters of eligible women for the study as follows:

“I chose women who appeared to be in the range of about 18 to 40 years of age; most of their face and most of the face of the dog or the cat with them had to be visible (no dramatic lighting which washed out features etc.); the woman could not be nude, in a sexy lingerie or skimpy bathing suit, and no dramatic or fantasy costumes, but rather dressed in normal clothing.”

It’s important to consider how many search inquiries Flickr gets for cats vs. dogs, what the view count of each image is, or what the most popular keyword is, but instead, Coren’s study controls for attractive women under the age of 40, and assumes any ‘fave’ is an indication of the viewer’s opinion of the woman. Ok, boomer.

People who like both dogs and cats are impossible to analyze

While a correlation may be enough to make a point, determining your pet’s personality and understanding how that reflects on you is best left to the real expert: You.

All of the personality assessments for pet parents, including Professor Wiseman’s more significant findings, face one important roadblock: If a person owns both a cat and a dog, they can’t be included in the dataset. That’s because these kinds of studies are designed to draw connections between an oversimplified model, in which a person must identify as either a cat lover or a dog lover.

You’re more complex than that, as is your pet and your relationship. So take these head-scratching stats with a grain of salt. Laugh with your cat without fearing psychosis, vote blue with your dog if that’s your jam, and don’t worry about whether or not your furry bff makes you more attractive. You’re a damn good pet parent.

Whether you have a Texan pup or a Lone Star Cat, it’s important to get them covered with pet insurance.

Pet obesity is incredibly common—in fact, the majority of cats and dogs tend to be overweight. Here’s how to keep your fur fam healthy and in great shape.

Should You Adopt a Cat?

Should you get a cat? Before you bring home your very own furball, get the facts on how to give your new friend a long and healthy life.