Among all the topics attributed to millennials, nothing beats the finger-wagging commentary on ‘millennials and home ownership.’ That really gets ‘em going.

Since millennials are now the largest living generation in the U.S., numbering 75.4 million (according to Pew Research), we decided to round up some of the myths surrounding millennial home-buying, and set things straight.

Truth: They’re actually just as good, or better, than their baby boomer predecessors

You’ve probably heard – or read- the tsk tsk that comes with talking about millennials and financial literacy. “They’re too lazy to double down on the numbers” or, “When I was their age, I was already saving so much more.”

A recent study determined millennials are overconfident and underprepared when it comes to managing their money – they think they know much more than the researchers say they do.

But times are a’changing, and comparing millennials to the baby boomers or their parents is simply inaccurate. They’re apples and oranges, if you will. With a technology-infused work environment and financial institutions reinventing their services to meet the new economies, millennials are diligent when it comes to being smart about their money. They know how to navigate their financial wellbeing using tools that were unavailable to their parents.

Take the rise of the gig economy as an example. Freelancers, contractors, and on-demand workers are all a reaction to the one-job-for-life school of thought, and illustrate the network connectivity and digital tools that millennials possess.

A Bank of America study from this year concluded that, despite the stereotypes, millennials are actually just as good, or better, than other generations when it comes to managing money, and they are getting their financial houses in order.

There may be some blind spots, but all in all, millennials have proven that their financial literacy is just right.

Myth: Millennials aren’t buying homes because they’d rather mooch off their parents

Truth: Guess what, world? Millennials have reached the prime age for economic activity, aka, buying a house.

Gone are the years when headlines blasted “get out of your parents basement, please.” In fact, many members of that large generation are now in their 30s, marrying and having children – and looking to buy a home.

Sure, in their 20s, this group was forming new households at lower rates than previous generations, due to a “scarcity of jobs in the aftermath of the financial crisis, large student debts, and perhaps a cultural shift in attitudes toward homeownership,” according to the New York Times. That appears to be changing as this generation gets older. So what age are millennials buying homes?

About four in 10 millennials (age 21-34) are already homeowners, according to a new survey by Bank of the West.

But get this: in the same survey, 68 percent of them say they’re feeling buyer’s remorse — almost double the amount of Baby Boomers who say they have regrets.

Not everyone is spending their dough on avo toasts. And even the ones who are munching away are misinformed about how much money they need upfront.

The miscommunication is in the actual numbers of the down payment.

The common thinking is: if you don’t have 10% to 20% saved up, you can’t afford to buy a new home. That’s simply untrue, as there are lenders that will accept a lower down payment. And, since there are lenders who are willing to go below the 20% down payment, saving up so much for a down payment is both unnecessary and likely the single most expensive money mistake you can make.

In fact, when shopping for a mortgage, lenders don’t foreclose solely according to a lacking sum of money — they foreclose on a home if payments have been missed for three months straight. (Forbes) Think about it: When you put all your savings in an illiquid entity like a house, you have no readily-available cash lying around for emergencies.

There are some downsides to small down payments that should be taken into account: putting less money down can result in higher interest rates and higher monthly payments.

Truth: Millennial homeownership is on the rise

Predictions around the implications of the sharing economy and on-demand services say millennials will shy away from big purchases like cars and homes. Millennials want instant gratification, the narrative goes, and they want it now.

But the data tells a different story.

And if we’re already debunking myths, the above study puts the millennials who own homes at 53 percent. So while Netflix, Spotify, and Airbnb have been incredibly useful for our day-to-day, this generation still wants to own stuff — homes and cars are no exception. 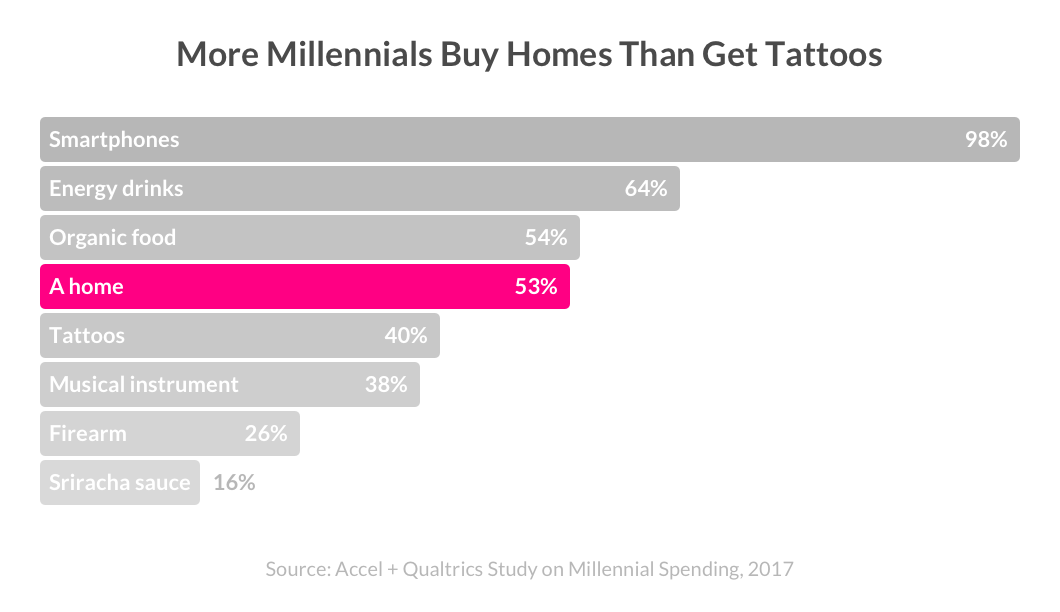 This isn’t to say millennials should drop everything and buy. The heavy burdens of paying off student loans, and scarcity of relevant housing are all reasons to continue renting. But a quick look at data gathered from a 2017 U.S. Census Bureau Current Population Survey shows that despite these challenges, homeownership among millennials is on the rise in cities of all sizes. 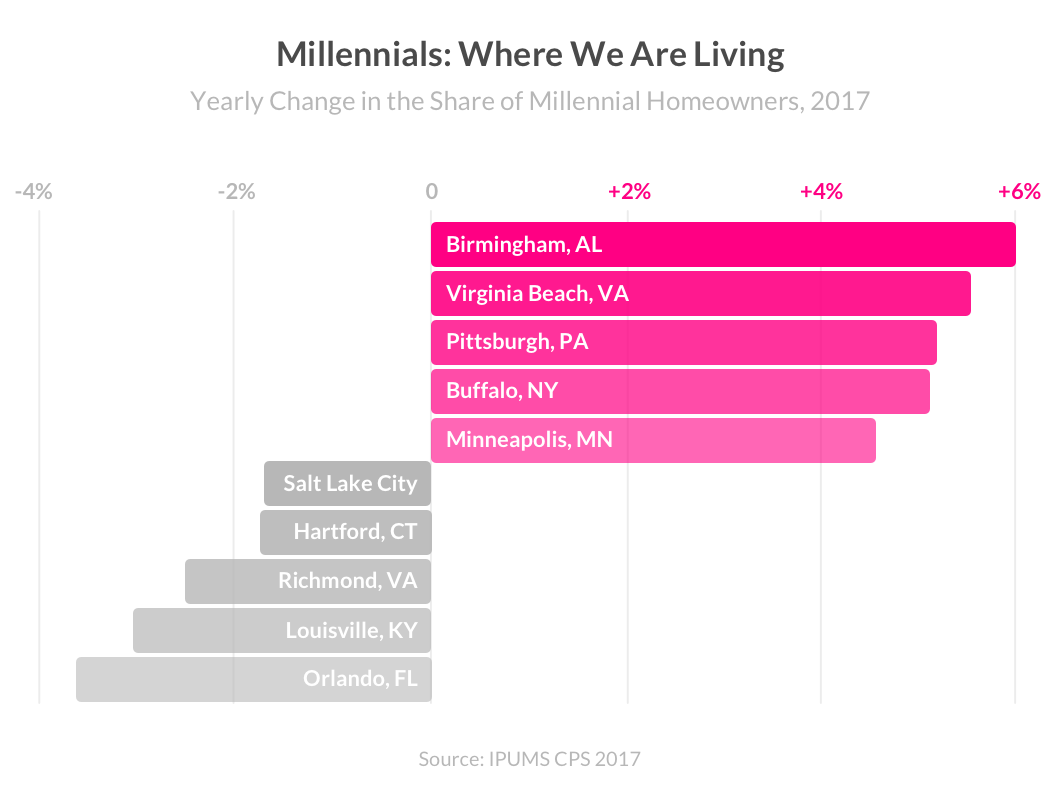 Truth: Almost 50% of millennial homeowners live in the suburbs

While it’s true no other generation had so many people in this age group live in urban centers, a Zillow study concluded 47 percent of millennial homeowners live in, wait for it… the suburbs.

The study goes on to explain this finding by noting since millennials waited longer to buy their first home, they’re looking for shared amenities such as community gyms and pools, and want a bigger home than the usual ‘starter’ homes.

The myths surrounding millennials are many, and while some have elements of truth to them (aka, some of us do appreciate our smashed avocado toast), the overarching notion that millennials don’t want to own things is simply untrue. In fact, the Zillow study concluded that “millennials are not just starting to buy homes; they’re powering the housing market.”

By using tech-powered tools and reinvented financial services (such as using Lemonade for instant homeowners insurance), millennials are finding it easier to ‘adult,’ albeit in a strikingly different way from their parents.

Homeowners insurance doesn’t have to be confusing. We’ll tell you what’s covered and what’s not, break down some basic insurance lingo, and help you choose how much insurance you actually need.