When you think ‘home insurance,’ easy-to-read probably doesn’t come to mind. Most policies are confusing, with crazy words like hovercraft and pewterware.

So what are ‘open perils’ and ‘named perils,’ you ask? Well, let’s start from square one. A ‘peril’ is something that’s covered under your policy.

‘Open perils’ means your insurance company will cover you for anything that happens, unless it’s specifically excluded. Pretty cool, right?

‘Named perils’ means your insurer will cover you for a specific list of 16 bad things (or 15, depending on what state you live in), which are usually these: 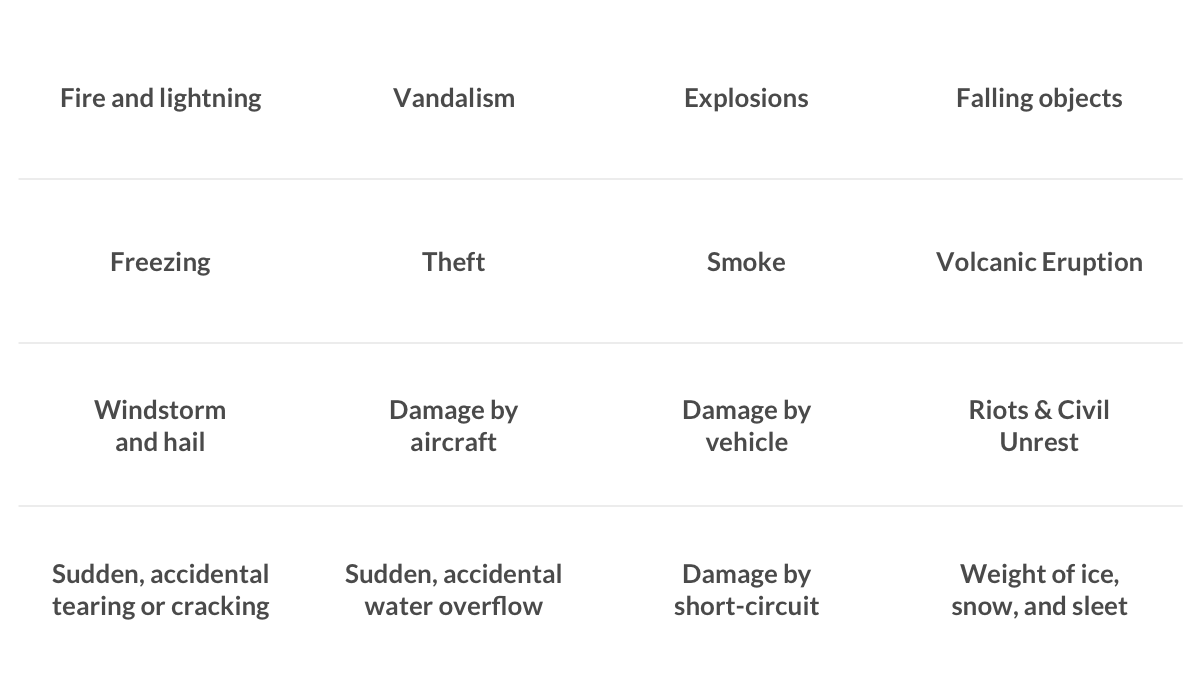 But of course, there are some bizarre intricacies and exceptions in most insurance policies. So we’re doubling down on these common Q’s about homeowners insurance coverage to set the record straight:

If you’re looking for an answer to a specific question, go ahead and scroll right to that section. But if you’d like a broader idea of what your homeowners insurance policy covers, you’ll be an expert by the time you finish this article.

Sometimes – it covers some types of water damage, but not others.

When water damage is covered

Generally, if the cause of the water damage is sudden and accidental, it’s covered by homeowners insurance.

For example, if your dishwasher suddenly goes on the fritz, your pipes burst, or your washing machine supply hose breaks, you’re covered.

Btw, homeowners policy will cover both the structure of your home and your personal belongings in your home if they’re damaged by water. But take note that the thing that causes the damage isn’t covered.

What does that mean? Let’s say your hot water tank bursts, and leaks all over your finished basement. Your household insurance would cover the replacement of your basement, but not the hot water tank.

Homeowners insurance doesn’t cover water damage when it stems from:

If you’d like flood insurance, you can go ahead and purchase a separate flood policy through the National Flood Insurance Program.

When mold is covered

Mold is covered only if it’s caused by a covered loss, such as fire, lightning, ice, frozen pipes, etc. The mold has to be hidden in the walls, ceilings, or beneath floors to be covered. Some policies offer mold coverage endorsements, which can extend the coverage.

For example, if your pipe bursts, and that water causes mold, you’re covered. The same applies if an ice dam forms on your roof, causing water to drip into your attic and mold to form.

Take note that these situations are covered if they’re sudden and accidental. So if your pipes burst, and you didn’t do anything about it for a few weeks, that mold won’t be covered due to negligence.

Cases where mold creeps up over time isn’t covered. So that gross stuff growing in your shower or underneath your sink? You should address it asap because it isn’t covered under your policy. That’d be considered negligence – something that your insurance company won’t cover.

Why? Insurance companies expect homeowners to proactively take care of these issues before they need to file a claim.

Depends on the cause of the leak!

When roof leaks are covered

Let’s say a windstorm blows through, and lifts your roofing shingles on your house, causing rain to leak onto your home. Your homeowners insurance would cover you, since this is a sudden, unexpected occurrence.

Btw – by ‘covered,’ we mean your homeowners insurance will help reimburse you for damages to your home itself, as well as any damages to furniture, appliances, systems, etc. that were caused as a result of the roof leak.

Generally, roof leaks aren’t covered when they happen because of gradual events, such as:

Why aren’t these events covered? Well, insurance companies believe people can take steps to prevent roof leaks caused by these events. And like us, roofs need regular maintenance.

So if you’re trying to figure out if your roof leak is covered by homeowners insurance, ask yourself: “Could I have prevented the roof leak?”

The more you show your insurer you maintained your roof and prevented damage, the greater the chance your policy will cover you.

If you live in an area prone to flooding (i.e. you own a sump pump or use the word ‘levee’ frequently), check out your community’s flood map and seriously consider getting flood insurance. For more info on flooding, FEMA’s National Flood Insurance Program has a pretty good Q&A section.

It depends on what caused the tree to fall.

When tree damage is covered

Like other things, tree damaged is covered if the cause is sudden and accidental. So if a windstorm causes a healthy tree in your backyard to topple, your homeowners insurance will cover the costs to get you out of this jam.

Bonus: If that same tree was in your neighbor’s backyard, not yours, your homeowners insurance will still cover you.

Let’s say a tree in your backyard wasn’t looking so good. You knew it was rotting, but didn’t do anything about it. Then, a windstorm came about, and totally knocked the tree over, damaging your house. In this scenario, homeowners insurance may not have your back.

Why? Even though windstorm is a covered peril, this situation could have been prevented since the tree’s been rotting for quite a while.

And if the tree falls due to an earthquake (not a named peril), you’re not covered. Reminder: You can purchase separate earthquake insurance to be covered during situations like these.

When theft is covered

Take note that homeowners insurance covers both stolen items and structural damage to your home caused by theft. So if a burglar damages your doors or walls (which we hope never happens), you’re covered.

A few types of items require special attention when it comes to theft: cash, and valuable items.

First off, there’s generally a limit to how much your insurance company can reimburse you for stolen cash – it’s usually around $200. Therefore, not all of your stolen cash may be covered.

Make sure to check your policy so you’re all clear on exactly how much cash is covered.

And if you have valuable items worth over $1,500, such as jewelry, bikes, fine arts, etc, they aren’t covered under your base homeowners insurance policy. But no fret – you can still insure ‘em.

You’ll need to get Extra Coverage for these items, so they’re covered in case of theft (or other ‘named perils’). Bonus: items with Extra Coverage are usually covered for accidental loss and mysterious disappearance as well.

Most of the time.

When dog bites are covered

Homeowners insurance covers you if your dog bites someone inside or outside your home. So if Fido bites his doggy BFF – or your owner BFF – you’re covered.

Bonus: Homeowners insurance also has your back if you or your dog cause damage to other people or property.

There are three exceptions to dog bite coverage:

1. If Buddy bites someone covered under your policy (b/c you can’t make a claim against yourself!)
2. If he has a history of biting
3. If your dog is categorized as ‘high-risk’

Side note: At Lemonade, we don’t discriminate against these types of breeds intentionally. But based on national insurance data, we must exclude certain breeds with a propensity for biting.

When termite damage is covered

If something sudden and accidental happens as a result of termites! So if your building abruptly collapses due to insect or vermin damage completely hidden from view (eek), you’re covered.

In all other cases, termite damage isn’t covered.

Why not? Because termites are usually considered preventable. They don’t arise out of nowhere – homeowners are generally aware of a termite problem before they cause serious damage.

Pro tip: To prevent any unwanted pests, bring in a termite inspector to sift through your home. It could save you serious $$ (and advil) down the line.

When roof repair is covered

Roof damage is typically covered under your policy’s hazard insurance. This includes roof damage to your garage and other structures on your property.

Specifically, your roof is covered for all perils that cause damage, like fire, wind, and hail damage.

So if your roof is damaged by a hail storm (ouch), or a tree that topples onto it during a windstorm, your policy will come to the rescue.

This may sound a bit familiar – roof repair isn’t covered if these things cause damage to your roof:

And, just like everything else, roof repair isn’t covered if the damage is caused by flooding or earthquake. For these scenarios, you’ll want to purchase a separate policy.

Pro tip: Get your roof inspected every 2 years. And if something happens, wait until your insurance company inspects it so they can assess the damage.

Homeowners insurance doesn’t have to be confusing. We’ll tell you what’s covered and what’s not, break down some basic insurance lingo, and help you choose how much insurance you actually need.

We round up some of the myths about millennial home-buying, and set some things straight.

Here’s your one-stop-shop for everything you need to know before you buy your first home.