A report by IBNR Weekly, one of the most respected publications in insurance, alarmed many industry-insiders:

“In an attempt to better understand Lemonade’s “killer” pricing, we “applied” for renters insurance through the Lemonade and Bungalow websites… the pricing was dramatically different as Bungalow’s annual price was ~5.6x Lemonade.” (IBNR Weekly, September 29, 2016)

Incumbents find the idea of a 560% price gap unsettling. Understandably. Beyond self-preservation jitters, some raised concerns about Lemonade’s ‘killer prices’ looking a lot like ‘suicidal prices.’ After all, they reasoned, insurance companies pay out in claims over 40% of the fees they collect.

So if Lemonade charges 80% less (same as saying others charge 5x more) Lemonade will be paying out in claims more than it receives in premiums! Lemonade must be recklessly naïve or worse, they surmised, and insolvency just a matter of time.

I get it. That’s why I’m writing this post.

We replicated IBNR’s exercise with our own ‘mystery shopper.’ We took a typical guy renting a typical apartment, and asked him to get quotes from the usual suspects.

The nation’s 4 largest insurers came in between 2X and 4X Lemonade’s prices for equivalent coverage: 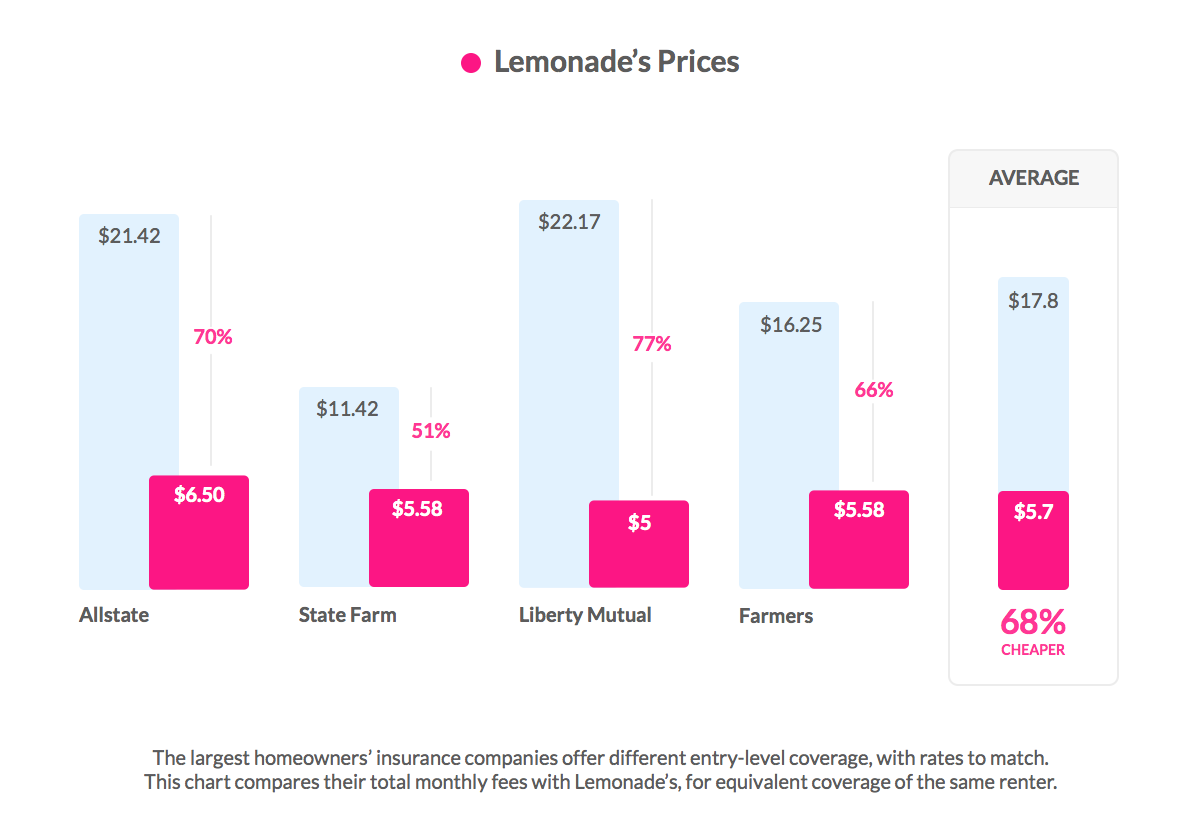 And it’s not just mystery shoppers. People have reported 85% savings when switching to Lemonade.

Lemonade works hard to lower fraud costs by aligning interests, and to slash expenses through technology. That makes for a more affordable and delightful experience, but can’t account for a 7X price difference… except for when it can.

Insurance is generally priced based on something called the ‘expected loss’. Actuaries look at historical data and guesstimate how much a person like you (given your claims history, credit score, age…) in an apartment like yours (given its size, materials, local crime rates…) will cost in claims.

Say a person like you in an apartment like yours averages a $3,000 claim once in ten years. Your annual ‘expected loss’ would be $300 ($3,000 divided by 10). The insurer doesn’t charge you $300 though. Quite reasonably, they mark it up to cover costs, profits and some safety margin, and so they will likely charge you about 2X your expected loss. In our example, $600.

This works well if you own the apartment ($600 condo insurance is pretty standard); but for traditional insurers this approach breaks down if you rent.

Renters insurance covers personal property, rather than real-estate. So renters insure a fraction of what homeowners insure, often >90% less, and their ‘expected loss’ is correspondingly low, say $30 per year.

And that’s where things come unhinged.

“Insurers, those relying heavily on exclusive agents, spent an average of $792…to acquire new customers, including agent commissions and advertising expenses… Companies that depend on independent agents spend an average of $900.” (Chicago Tribune)

If I spent $800–$900 to acquire your business I’d go broke selling you anything for $60, no matter what your ‘expected loss’ might be!

So legacy insurers routinely abandon actuarial science when it comes to renters, instead setting a ‘minimum price’ that reflects their high costs, rather than your low claims. And so they might charge $200 or more for an expected loss of $30 or less.

There’s nothing malicious about this. It’s a business necessity. But it does expose an unintended consequences of the traditional insurance model:

So how can Lemonade be 80% cheaper?

You guessed it: by building an insurance company, from the ground up, powered by A.I. and behavioral economics. Not brokers and bureaucracy.

It’s not just a marketing slogan: our acquisition costs are already 10x lower than legacy carriers. This allows us to do away with punitive minimum premiums, and allows renters to save a fortune on insurance. Simple.

80% cheaper is achievable without being reckless or naïve. Indeed it has so been achieved. It is available 24/7, courtesy of a delightful bot who will fashion you a $5 policy in 90 seconds and with zero paperwork.